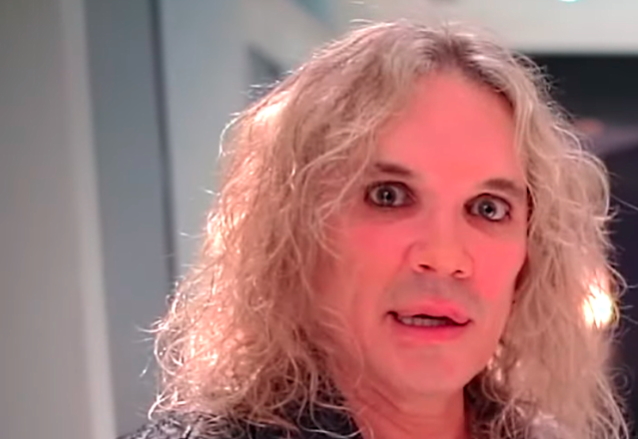 Last month, Jericho challenged Bach to a "singoff" with "no effects, no tuning, no bullshit" in response to Sebastian's allegation that Chris "mimes to a tape" during FOZZY's live shows. "Bas is a great singer...but I'm better," Chris wrote on Twitter." The wrestler-turned-singer added: "I've never mimed anything ever! I will fucking sing in your face anytime, anyplace dude. I've been a fan & a defender of u since day one...but don't u ever question my rock abilities!" Bach fired back: " You're full of s*** bro. Every clip on the Internet is you miming to a tape. I will sing in your f****** face anytime. Wrestling is not rock and roll. I will show you f****** rock and roll. Check your texts set up The Sing-Off I am ready when you are".

Asked in a new interview with Meltdown of Detroit's WRIF radio station for his opinion on the Bach-Jericho feud, Starr said: "It's tough, because they're both my friends. Sebastian has a tendency to say stuff — he starts ripping on me, and he doesn't even realize it. I'm, like, 'Dude, calm down. Quit making fun of me.' Calling me a fucking 'track band.' 'Cause he called our drummer from a 'track band.' And just for people who are listening and may not know, a 'track band' means that you play along with pre-recorded tracks. And we've never hid the fact that I can't sing, so for him to do that to me was just not cool."

"I stay off the online battles," Michael continued. "But one thing I do endorse — kind of like what Sammy Hagar did for Vince Neil and Axl Rose — I say they get in the ring and fight. That's my opinion. I mean, that's the best way to solve stuff — is by fighting. And you know that. When you're at school… 'Cause this sounds like a school fight to me. This sounds like, 'You're a jerk.' 'No, you're a jerk.' 'I slept with your girlfriend.' 'No, you didn't.' 'Yeah, I did.' 'You're a jerk.' That kind of just immature fighting, and I think it would be really cool to see 'em just fight it out on that level. Sebastian would have to train for it, 'cause Chris is already ready to fight. So maybe they can arm wrestle or something. I don't know."

According to Starr, it was wrong of Sebastian to call out Chris in the first place. "You can't do that," he said. "It's the bro code, man. You don't do that. What's the point of doing that, anyway? You're just trying to hurt somebody's feelings. Even if they do or don't… Let's say they don't, and you say, 'Your penis is really small.' That's just not cool. That's kind of like the bro code. Leave it alone, dude. That guy's got a small penis. That's cool."

When Bach first went public with his Jericho accusation last month, FOZZY guitarist Rich Ward called Sebastian "universally disliked" and said that seeing Bach "publicly go after the only guy that I have ever witness utter a nice word about him is sad."