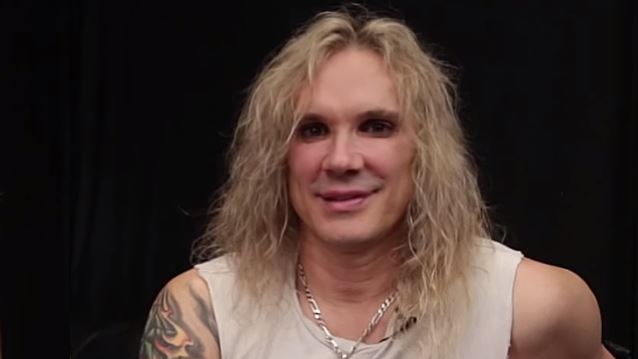 During a brand new interview with Meltdown of the WRIF radio station in Detroit, Michigan, STEEL PANTHER singer Michael Starr was asked if his band has ever had a chance to share the stage with former STONE TEMPLE PILOTS and VELVET REVOLVER frontman Scott Weiland. Starr responded: "When we had a residency in Hollywood on the Sunset Strip, we were just playing our normal show. And you never know who's gonna pop up, right? So I get a message that Scott Weiland's there. And, of course, it's Scott Weiland… Anybody who's there that's famous, we're gonna bring him on stage. So we pull him on stage and we start playing [the STP classic] 'Plush'. Everything's going good. He forgets the words, which is, I think, normal for him, right? But then he stops the song and he goes, 'You guys are playing the song wrong, man.' I go, 'No, we're not, dude. You fucked up.' Yeah, he was pretty hammered, dude. He forgot all the words. But you know what? At least I can say I got to jam with him."

Starr added that STEEL PANTHER has never had another run-in with Weiland again. He explained: "Yeah, you know, when you're a heroin addict, you really don't socialize that much."

Weiland was found dead on Thursday, December 3, while on tour with his solo act, THE WILDABOUTS.

Following his death, police found cocaine, Xanax, synthetic opiates, sleeping pills, Viagra and medication used to treat Weiland's bipolar and schizophrenic diseases on the bus and in the singer's bedroom.

Cocaine was also found in bassist Tommy Black's bunk, and the bassist was arrested on possession charges but later released.

STONE TEMPLE PILOTS and VELVET REVOLVER issued statements on his passing, while musicians and fans around the world have also posted tributes.