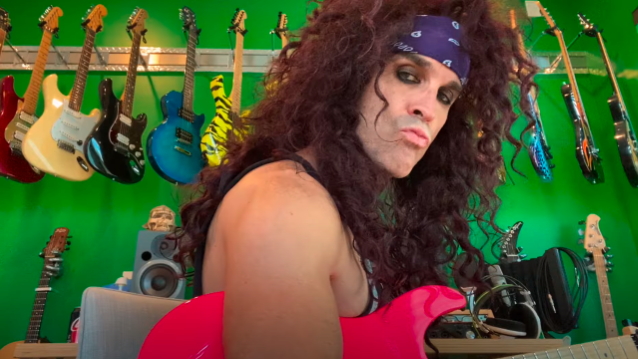 STEEL PANTHER's SATCHEL Teams Up With Members Of U.D.O., JADED HEART And BONFIRE For Cover Of VAN HALEN's 'Unchained' (Video)

STEEL PANTHER guitarist Satchel has teamed up with members of U.D.O., JADED HEART and BONFIRE to record a cover version of VAN HALEN's "Unchained" as a tribute to Eddie Van Halen, who died on Tuesday (October 6) after a long battle with cancer.

Dee said in a statement: "A couple of weeks ago, we started to record 'Unchained' by VAN HALEN. It is with deep sadness that we heard about passing away of Edward Lodewijk 'Eddie' Van Halen on the 6th of October 2020. Our condolences go out to the family."

The song was mixed and mastered by Manuel Cohnen at Parabol Audio.

Last year, Satchel told Music Radar about Eddie Van Halen: "Eddie influenced everybody, but especially guys that are as old as me. Of course when I heard 'Eruption' for the first time, I thought, 'Holy shit, this guy sounds amazing!' but people forget how insane his rhythm playing is. You can see 11-year-old kids playing 'Eruption' — we've had them on stage with us — but they can't play 'I'm The One'… nobody can play it quite the same. Why is that, you wonder? Because it's harder to get that feel. 'Eruption' has less time and rhythm to it.

"Ultimately, Eddie had everything down and best of all he wrote killer songs. What I love about 'Runnin' With The Devil' and a lot of the big hits is the fact they were so simple. 'Ain't Talkin' 'Bout Love' is just an arpeggio, right? But it's such a catchy song."