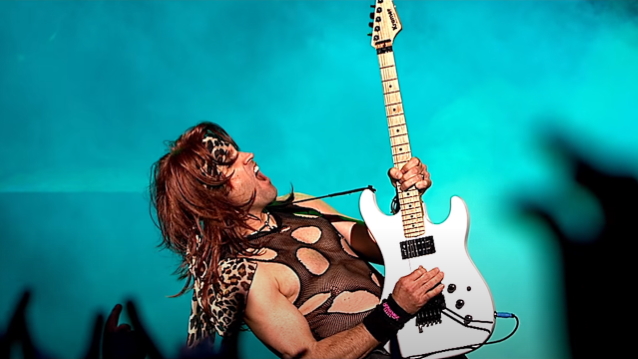 STEEL PANTHER's SATCHEL Weighs In On NIKKI SIXX's 'Most Underrated Bassist' Claim: 'Does He Play The Bass In That Band?'

STEEL PANTHER guitarist Satchel has weighed in on Nikki Sixx's claim that he doesn't get the credit that he deserves as a bass player.

Last week, the MÖTLEY CRÜE rocker was asked by a fan on Twitter to name "the most underrated bass player ever." Sixx replied simply: "Me".

Asked in a new interview with Pennsylvania's 97.9X radio station for his take on Sixx's comment, Satchel said (see video below): "The most underrated bass player? [Laughs] Does he play the bass in that band? [Laughs]

"Nikki Sixx, I don't think anybody really gives a shit how well he plays the bass.

"I give it up for CRÜE — I love 'em; they're great. But I've seen MÖTLEY CRÜE a bunch of times, and they've never sounded great live. But nobody gives a shit. He should be glad that they don't really have to sound great live. Vince [Neil] has never been a great live singer. Who gives a shit? They've got great songs.

"Listen, we toured with those guys, and I think [Nikki] said two words to me the whole fucking tour.

"I love those guys. They can hate us as much as they want. We're gonna keep on fucking rocking.

"Those guys are great," he added. "And if [Nikki] wants to bag on us, that's cool. We're a great live band. If he wants to come out and see us some time and jam with us, he can sit in with us and I'll tell him all the right notes to play on the bass."

Last year, a war of words between STEEL PANTHER and MÖTLEY CRÜE broke out when STEEL PANTHER drummer Stix Zadinia and singer Michael Starr were asked in an interview which musician from the past they would like to bring back. Starr replied, "I'd bring back Vince Neil," and Zadinia chimed in, "He's not dead." Starr pressed on, saying: "I'd bring back Vince Neil from back in the day because that guy is dead."

This was not the first time members of STEEL PANTHER and MÖTLEY CRÜE had traded barbs. In 2017, Zadinia said that his band "really felt unwelcome" during its tour with MÖTLEY CRÜE several years ago. The drummer, whose real name is Darren Leader, told Music Life Magazine: "[MÖTLEY CRÜE drummer] Tommy Lee and Nikki Sixx did not like it when we went on tour with them in 2011. And that was the only time that we really felt unwelcome. The thing with those guys is I think they thought we were actually making fun of them directly. And I just gotta chalk that up to their egos being too big, because nothing that we do has anything to do with them directly. But we ended up doing the tour and it went off great and everything was totally fine."