STEPHEN PEARCY: 'I Won't Do Another RATT Record Unless It's With The Original Guys'

During an appearance on today's (Tuesday, March 23) episode of SiriusXM's "Trunk Nation With Eddie Trunk", Stephen Pearcy confirmed that he is open to the idea of making a new RATT album with all the surviving members of the band's classic lineup.

"I put the feelers out [a couple of months ago] and addressed the situation, and I'm sticking to what I think would be a great thing," he said (as transcribed by BLABBERMOUTH.NET). "It if happens, who knows? It'd be great. But I won't do another RATT record — no. Not unless it's the original guys. No way. There's no reason. We've already tried that. We got close, but no cigar.

"I would love for the guys [to get back together], if everybody can get their foot out of their ass," he added. "But it wouldn't bother me if we didn't.

"Like I say, I don't wanna do a record [with anybody but the original guys]. I mean, that's just a little too personal. Doing live shows is a whole other ballgame."

As previously reported, Pearcy and his solo band will take part in a livestream concert on Friday, April 2 at 7 p.m. PDT from the world-famous Whisky A Go Go on the Sunset Strip. He will be joined by members of ACE FREHLEY, LITA FORD, DANZIG, HELLYEAH, ARCADE and "a very special guest."

Tickets, merchandise and VIP packages are available at stephenpearcy.veeps.com.

Last month, it was reported by Metal Sludge that Pearcy would be joined by former RATT drummer Bobby Blotzer for the filming of the virtual concert with his solo band over February 26 and February 27.

The rumors of Blotzer playing with Pearcy again came a month after Stephen confirmed to "Trunk Nation With Eddie Trunk" that he was back on speaking terms with the drummer, who led his own version of RATT for a couple of years beginning in late 2015 before becoming embroiled in a legal battle with the singer, guitarist Warren DeMartini and bassist Juan Croucier over the rights to the band's name.

"I do talk to Bobby," Pearcy told "Trunk Nation" in January. "Bobby and I are — it's love-hate, brother kind of a gig. We keep in touch and talk about positive things. He still has interest, so there are some things to talk about. And Warren is the same."

During the same chat, Pearcy first floated the possibility of making a new RATT album with all the surviving members of the band's classic lineup.

"I wouldn't wanna put a RATT record out there without the original guys," he said. "I mean, it just wouldn't make sense. We've tried it.

"Look, I accepted it a long time ago when Robbin [Crosby, late RATT guitarist] left the band, we lost a big element of direction. He was my right-hand man creating this monster. And I knew it — I knew once he was out, we would be going through motions. It's all cool, and it's great, but how many replacements can you have in a band and still consider it legit? So if we're gonna have something on plastic, so to speak, forever, I'd rather have the original band do a record and just not do a RATT record until that day comes — if it ever happens."

Stephen also stressed the importance of not letting personal differences get in the way of making music and touring while he and his bandmates are still physically able to perfom the classic RATT songs live.

"Look, we're not the most dysfunctional band on the planet," he said. "I've said it before, there are bands much more dysfunctional — MÖTLEY [CRÜE], GN'R [GUNS N' ROSES], you name 'em — but the smart ones make an effort to take care of business. MÖTLEY — I don't know if they even talk to each other, but they're getting the business done. And that's where I'm at. What are you — punishing somebody? You're getting back at somebody? You're holding a grudge, vendetta… It's all bullshit. We're all gonna die anyway. Go figure it out."

RATT — featuring Pearcy, Croucier and DeMartini — played a number of shows in 2017 after reforming a year earlier in the midst of a highly publicized legal battle with Blotzer over the rights to the RATT name. They were joined at the gigs by ex-QUIET RIOT guitarist Carlos Cavazo, who played on "Infestation", and drummer Jimmy DeGrasso, who previously played with Y&T, WHITE LION and MEGADETH, among others. 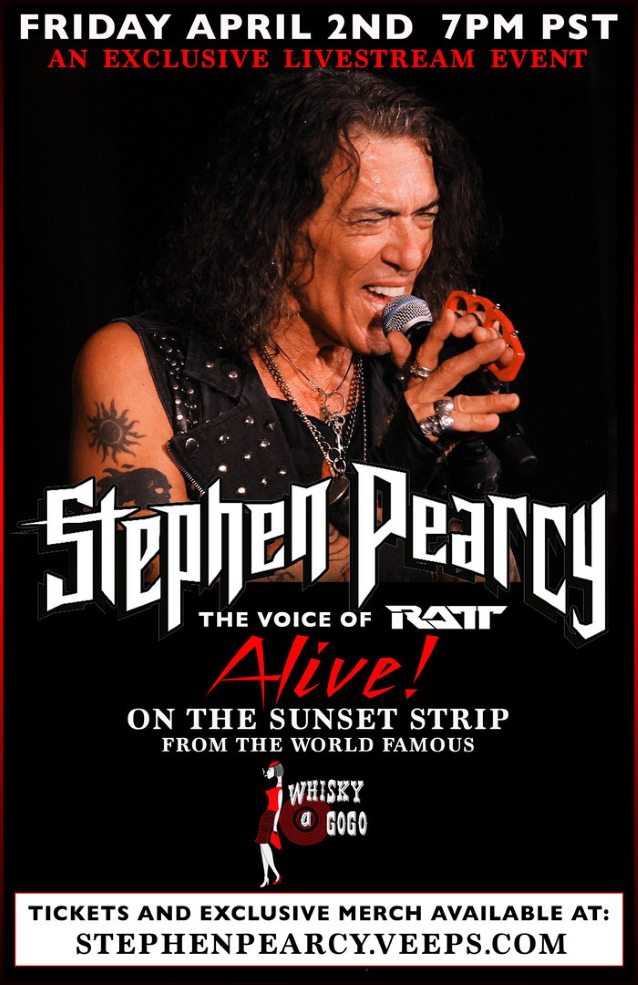