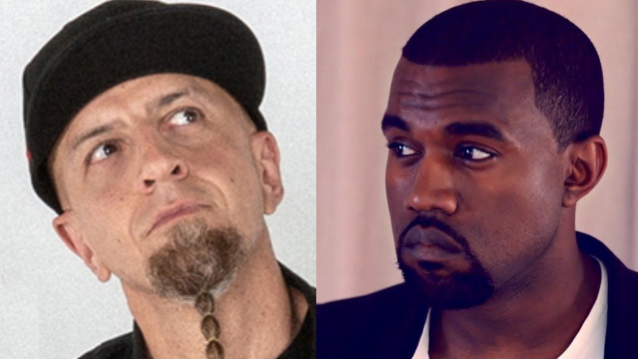 SYSTEM OF A DOWN's SHAVO ODADJIAN: I Used To Be Very Good Friends With KANYE WEST'

In a new interview with Puraphy, SYSTEM OF A DOWN bassist Shavo Odadjian was asked if he has ever had any personal encounters with reality stars Kourtney, Kim, Khloé and Rob Kardashian, who are all also of Armenian descent. He responded: "Oh, I know the Kardashians quite well. I used to be very good friends with Kanye [West, Kim Kardashian's ex]. Though this was a few years ago now, I've been to their house a lot. They're just like you'd imagine they'd be: very cool, personable people. In fact, when SYSTEM OF A DOWN was asked to play in Armenia in 2015, come to find out that Kanye had just played the same venue a week before we did. Yeah, I like the Kardashians a lot."

Odadjian is not the only member of SYSTEM OF A DOWN to publicly praise the Kardashians. While speaking to Consequence Of Sound last October, SYSTEM OF A DOWN singer Serj Tankian said that he has a lot of respect and love for Kim Kardashian for using her platform to shed light on the 1915 Armenian genocide.

"I'll tell you something about Kim — I have a lot of respect for her," he said. "When it comes to issues of justice, she's been really great. When it comes to spreading awareness about the need for recognition of the Armenian genocide, about what's going on in Artsakh right now, the revolution that happened in Armenia that no one in the U.S. knew about, she's been really amazing. I've met her a few times."

Asked whether Kardashian is a fan of SYSTEM OF A DOWN, Tankian responded: "I haven't asked. [Laughs] Honestly, the only time that we spoke was about Armenia, and it was great."

Last November, Kim Kardashian shared a message from SYSTEM OF A DOWN about "Protect The Land" and "Genocidal Humanoidz", the band's first new songs in 15 years. The tracks were motivated by the recently erupted conflict between Artsakh and Azerbaijan, the latter aided by Turkey and accountable for the greatest violence the region has endured in 26 years. Produced by guitarist/vocalist Daron Malakian, who also wrote the music and lyrics, both songs are streaming now on all DSPs and are available for purchase on Bandcamp with band royalties earmarked for the Armenia Fund.

Thank you @KimKardashian In solidarity. https://t.co/rK1Yf3LiTn