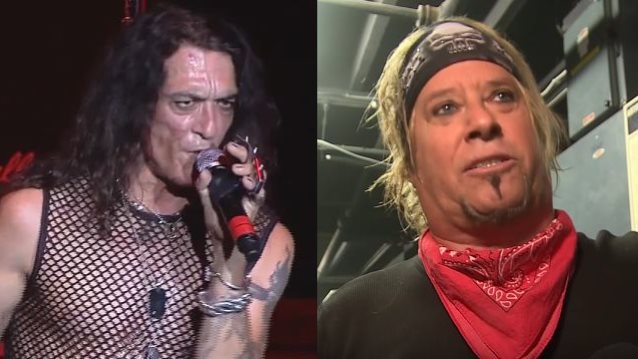 During a recent interview with the "Eddie, Jason & Chris Show", RATT singer Stephen Pearcy spoke about the legal battle the band has been embroiled in with drummer Bobby Blotzer over the rights to the group's name.

Last November, a California judge ruled against Blotzer with respect to whether bassist Juan Croucier had committed trademark infringement by using the RATT name and logo to advertise his band RATT'S JUAN CROUCIER back in the fall 2015. The judge furthermore decided that the corporation WBS, Inc. — of which Blotzer and guitarist Warren DeMartini were thought to be the sole shareholders — did not have ownership interest in the RATT marks and that the name and brand was still owned by the members who were part of the original RATT partnership agreement.

In addition to claiming to have expelled Blotzer from the partnership following the latest court ruling, DeMartini, Croucier and Pearcy said that Blotzer could now only refer to himself as a "former member of RATT," as per the partnership agreement.

Asked for an update on the court dispute over the rights to the RATT name, Pearcy told the "Eddie, Jason & Chris Show" (hear audio below): "A person decided, through another entity, which no longer exists, that he had control and rights when, in fact, he didn't, and it was proven in court that the partnership does — and that's the four of us, including him. But we fired him up from the partnership. So pretty much the dust has settled. It's just finalities now, legally. It was not a good thing."

He continued: "The thing is, with the band, this guy never wrote a note, and he just decided, 'Well, I'm king of the jungle, and I'm gonna rewrite history,' and we said, 'No, you're not.' And the fact that he was suing us made it even worse. It's, like, okay. How many fights do you wanna get into? One big gangfight, or you wanna take each one of us on by yourself?' And he decided to do it by himself, which is even worse. So we're happy with the outcome, and we are the only version that is out there and will continue to be out there."

Pearcy went on to express his outrage that Blotzer would even contemplate carrying on as RATT without any of the other members of the band's classic lineup. He said: "When you have somebody, like I say, try to rewrite history, and they're doing it with a cover band… And, look, I wrote a lot of, if not all of the songs I had something to do with, so it had more to do with our integrity. It's, like, we work all these years, and people still wanna see us. We don't go and play out there all the time anyway — we take a year or two off, or maybe six years between records — but that gives nobody else permission to just decide one day, 'Well, guess what? I'm going to do everything. And I had nothing to do with nothing but play drums.' So it was kind of insulting and damaging to the integrity of the group and our legacy. I mean, I'm sure Robbin [Crosby, late RATT guitarist] is quite pissed somewhere. The band will never be the same without him, but I'm sure he's not lying peacefully right now. Or he is now, but when this was going on.'

He added: "The dust has settled, and that's pretty much how we'll leave it. We're not into mudslinging and this adolescent name calling and stuff, which we found very humiliating to our audience. You know, our audience is much smarter than somebody gave them credit for."

According to Stephen, the newly reactivated RATT has already commenced the songwriting process for the long-awaited follow-up to the band's 2010 album "Infestation", although fans shouldn't expect to hear any new material for at least another year. "Now that [my new solo album] 'Smash' is done and out there, Warren and I have actually demoed up a couple of songs [for RATT]. We would like — as we're taking things very meticulously this time around… Hopefully by the end of the year we'll start work on the record. That's the plan, so that we can have a nice 2018 with a new record."

He continued: "We like making records. The one thing that keeps this band together all the time — in particular Warren and myself, and even Carlos [Cavazo, former QUIET RIOT and current RATT guitarist], who wrote on the last record — is the music. I mean, this is what we do. I do it 24-7. I'm always writing for something. But, yes, we'd like to start work, at the end of the year, on a record."

Pearcy, Croucier and DeMartini played their first official show as the reunited RATT on February 11 at Treasure Island in Welch, Minnesota. They were joined on stage by Cavazo and drummer Jimmy DeGrasso, who previously played with Y&T, WHITE LION and MEGADETH, among others.

A completely different version of RATT — led by Blotzer and featuring a revolving door of members — has been hitting stages across the country since the fall of 2015.