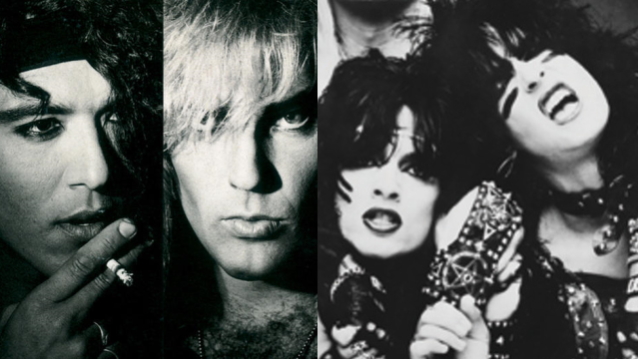 In an interview with Tommy London of SiriusXM Hair Nation this past Thursday (June 30), RATT singer Stephen Pearcy confirmed that he and RATT guitarist Robbin Crosby almost formed a band with MÖTLEY CRÜE's Nikki Sixx and Tommy Lee four decades ago, shortly before their now-legendary hard rock groups officially launched.

"I'm doing another book, part two, next year, and that's actually one of the stories that I kind of held back," Pearcy said (as transcribed by BLABBERMOUTH.NET). "There's a bunch — with VAN HALEN and guys and stuff.

"When we met MÖTLEY — first we have to start with how we met them," he continued. "So Robbin and I used to go out all the time into Hollywood — you know, 'The [Sunset] Strip, yeah. You've gotta be seen. You've gotta be out there.' Well, MÖTLEY was doing the same thing. Nikki, Tommy, Vince [Neil, CRÜE singer] — they'd be doing the same thing. You know, tripping down the Strip, going to the Rainbow, going here, getting fucked up… So anyway, we meet them on the Strip, hanging out. We became friends and we became The Gladiators, which was our street thing there, when we went out together. And we each had names, which goes back to [Robbin's nickname] 'King'. I don't know if it was Nikki who gave him that nickname or Robbin gave it to himself.

"So in '82, we really became close friends," Stephen said. "I don't think Nikki was ever really satisfied. Musicians were coming and going in bands, as the whole implosion was getting going — [in] '81, '82 in L.A. and that whole Strip thing. He wasn't happy with his band at that moment.

"So, yes, it's a true story. Robbin, Nikki, Tommy and myself, and me on guitar, were rehearsing at [pre-RATT band] MICKEY RATT's rehearsal in Culver City there. And I believe we rehearsed for a couple of times. I don't know if we wanted to start a band or if we were just jamming, but something was getting intense in there. And Nikki is, like, 'Nah. I'm gonna go do my thing.' And I said, 'Well, I'm here. Me and Robbin are doing our thing.' And so be it.

"Yeah — true story. True story," Pearcy repeated. "So, if that would have been a band, it would have been a great band, actually. I don't know what songs we played, but we were very supportive of each other back in the day, in the beginning, yeah. It was great."

Asked if they had a name for the band picked out or if they were just going to call themselves THE GLADIATORS, Stephen said: "Well, that's probably what we were gonna call it — THE GLADIATORS. I really don't know. I'd have to check with my roadie guy back then. I forget the shit. We were kind of almost taking it seriously, if I remember, like, 'All right. We're gonna be here. We're gonna rehearse.' But it happened a couple of times, yeah — a couple of times. So there's a bit of a tale there."

Last month, on the 20th anniversary of Crosby's death, Nikki paid tribute to the late guitarist on social media, writing: "Thinking a lot about my best friend from back in the day. So many tributes floating around on the web this week. Miss you KING. Can't wait to start our UFO cover band together someday."

Crosby reportedly died of a heroin overdose in 2002 after battling addiction for many years, contracting HIV and eventually full-blown AIDS as a result of his drug use.

In his 2013 autobiography "Sex, Drugs, Ratt & Roll: My Life In Rock", Stephen wrote about his life from childhood to the formation of RATT in the 1970s and the band's rise to prominence in the Sunset Strip hair metal scene of the 1980s. In the book, he also shared how he was primed for a life of excess from a young age — his father died of a heroin overdose when he was 12, and by the age of 15, Stephen was himself a drug addict.