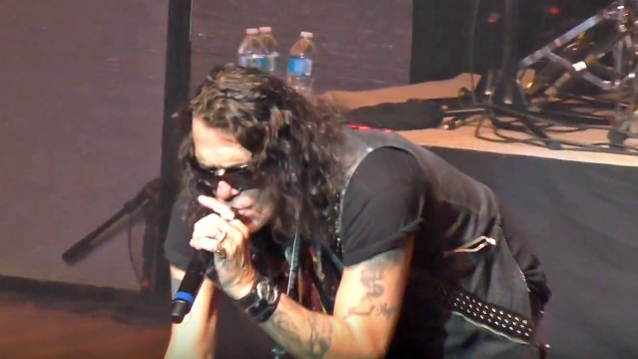 STEPHEN PEARCY Was 'Stumbling' And 'Couldn't Remember The Words' During RATT's Concert In St. Charles (Video)

Some of the fans who attended RATT's concert Friday night (October 5) in St. Charles, Illinois say that lead singer Stephen Pearcy was "stumbling" and couldn't "remember the words" to many of the band's most popular songs.

Fan-filmed video footage of RATT's performance at the Arcada Theatre — courtesy of YouTube user JW Stuff — shows the frontman slurring his way through the set and struggling to hit the notes in the group's biggest hits.

Michael Hlavin tweeted: "Went to the @ArcadaTheatre to see RATT. Band was awesome especially Jason on lead guitar as they tried to cover for Stephen Pearcy. Complete Poser - drunk, drugged out, stumbling and can't remember the words. Kept walking off stage or sitting on drum riser. What a joke!! #rehab"

Another fan posted a short video clip of the concert and wrote about Pearcy: "Trashed again on stage 10/5 getting BOOED!"

The Arcada Theatre performance took place just over a week after RATT's disastrous show in Huntington, New York, where Pearcy was also slurring while sitting down and nearly lying down on the drum riser. The 62-year-old singer also appeared to be slouching or leaning on to the bass drum during "Round And Round" and holding on to the tom-tom stand and bass drum to keep from falling over.

This past summer, Pearcy said that Warren DeMartini "didn't wanna go out there" and play shows with RATT, leading to the guitarist's departure from the group. "We wanted to clean house, and that's it, and go out and enjoy ourselves for once," he added. 'Enough drama. We've been through enough."

He continued: "It's very simple — you either like what you're doing or you don't," he said. "And we do. But it has to be with the right people. It's not like we need to hire Jimmy Page or somebody. We're gonna work with people that we have a great time with."

Went to the @ArcadaTheatre to see RATT. Band was awesome especially Jason on lead guitar as they tried to cover for Stephen Pearcy. Complete Poser - drunk, drugged out, stumbling and can’t remember the words. Kept walking off stage or sitting on drum riser. What a joke!! #rehabpic.twitter.com/JYmjW4fobs

#StephenPearcy of #RATT trashed again on stage 10/5 getting BOOED! @MetalSludge@BLABBERMOUTHNET@cmsrocks@GregRenoff@EddieTrunkpic.twitter.com/QqtZtxzGtK