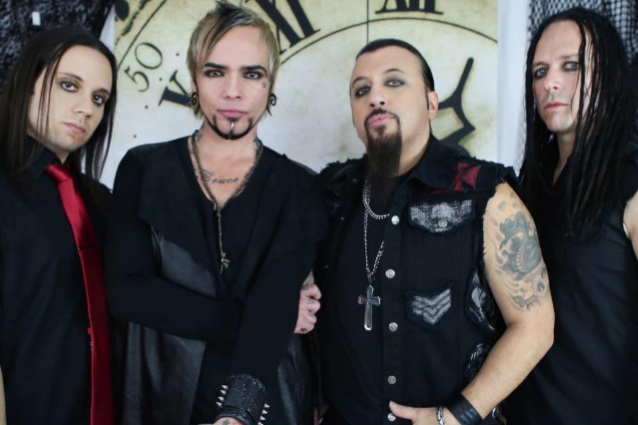 Says the group: "After years in the making, we are very proud to be finally sharing our new band with the world... Ladies and gentlemen, we give you STEREO SATELLITE.

"By melding hook-filled melodies within heavy guitar riffs and hard beats, STEREO SATELLITE shows their ability to compact a vast array of influence and experience into a signature sound with substance, style, and spirit."

STEREO SATELLITE will make its live debut at the ShipRocked cruise on Tuesday, January 23, 2018.

Orlando and Cannata were both involved in a crash last July that resulted in the death of ADRENALINE MOB bassist David Zablidowsky.

The band was touring in support of its third studio album, "We The People", which was released on June 2 via Century Media. The follow-up to 2014's "Men Of Honor" was the first ADRENALINE MOB release to feature Zablidowsky and Cannata.

Orlando states: "Over the past recent months, I have learned a lot about how cathartic music can be, especially after going through such a heinous life-changing tragedy. It's been a complete uphill battle in even trying to begin to heal physically and mentally. I have a long road ahead, for sure, and will have to undergo many more procedures and ongoing therapy. I don't think I'll ever fully heal mentally, but I've been moved to write songs again with my brother Lukas, who I feel is an amazing songwriting partner, and start this new band along with my brothers John Moyer and Jordan Cannata. I find it really helps me to cope and I can't wait to share all the music we've written and start touring again full-time."

Moyer admits to having mixed feelings about the band being dubbed a supergroup. "We hate the supergroup thing because it's a new band in its own right," he says. "But I think it's important for us to say we've been around the rock music scene for a long time and in various ways. STEREO SATELLITE is a new beginning for us all, and I'm looking forward to sharing our new music with the fans very soon."

Rossi concurs, saying: "I can't wait to release our new songs and perform them live with these awesome guys. Regarding the supergroup thing, look I don't care what you call us, just call us!"

Moyer joined DISTURBED in 2003 and has appeared on the albums "Ten Thousand Fists", "Indestructible", "Asylum" and "Immortalized".