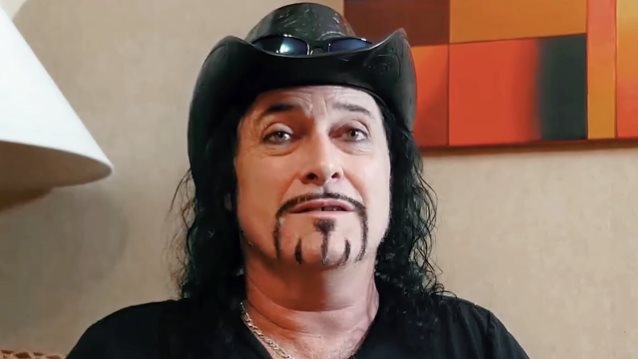 STET HOWLAND Is Open To Rejoining W.A.S.P. For 'Handful' Of Reunion Dates

Stet Howland says that he is open to returning to W.A.S.P. for a "handful" of dates featuring a partial reunion of the band's classic lineup.

The veteran drummer, who has been a member of METAL CHURCH since earlier this year, tells Duke TV: "I'm very happy where I am. I somehow landed in METAL CHURCH and I just love it. But if Chris [Holmes, former W.A.S.P. guitarist] did W.A.S.P. [again] and it came up and I got a phone call, I might do the handful of dates that the world would probably be interested in. There might be a reconciliation, like DOKKEN did in Japan, if someone had enough money or something. And I may or may not be included in it, but Chris should be. I think he was a big part of W.A.S.P. His image and the movie 'Max Max' are where the whole damn thing came from, really."

Howland, whose last stint with W.A.S.P. ended in early 2006, recalled some of the heated exhanges he had with the band's leader, Blackie Lawless. "When me and Blackie would have a fight or something, I'd be at the studio… I remember one time I'm in there tracking, and we'd been working for days in a row, and I'm, like trying and trying, I'm, like, 'Ah, fuck!'" he said. "And he's, like, 'Stet, you've gotta get this.' And I'm, like, 'You fucking get it,' and I threw the sticks at the fucking window and [I said], 'Fuck you!' and I stormed out like a little girl. And then [we would have] no contact for about a week and then he'd call me up and go, 'So, are we over our little tiff and ready to get back to work?' I'm, like, 'Yup. I'm ready to come back to work.' I'm, like, 'Shit, I don't wanna be fired.' And I didn't necessarily quit; I just wanted to stop doing what we were doing."

Stet was recently diagnosed with Diffuse large B-cell lymphoma (DLBCL),an aggressive type of non-Hodgkin lymphoma that develops from the B-cells in the lymphatic system. He said in an online posting that "while it is a very aggressive form of cancer, it is also very treatable with an eighty percent cure rate." He added that he expected to be given a clean bill of health and begin tracking the next METAL CHURCH album in the coming months.