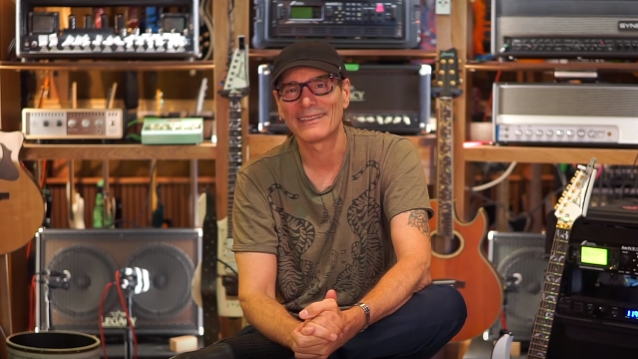 STEVE VAI On Performing With YNGWIE MALMSTEEN: 'It's A Peak Moment For Me In The Pantheon Of My Live Touring Experience'

Andy Hall of the Iowa radio station Lazer 103.3 recently conducted an interview with guitar virtuoso Steve Vai about his "Generation Axe" tour. You can listen to the entire chat via the SoundCloud widget below. A few excerpts follow (transcribed by BLABBERMOUTH.NET).

On whether he had a "wish list" for the "Generation Axe" tour:

Steve: "One of the really great things that I love about the job that I do and the business that I'm in and the creative aspect of it when I came up with this project, it's like any project anybody has when they conceive it — it's fun. In your imagination, you can pretty much do anything within reason. When I came up with this tour, I visualized and thought, 'That's cool.' From where I resonate as a guitar player, I've got to do this. I actually created genre lists of specific players. I had a rock category, metal, blues, fusion and I just wrote down all of my favorite guitar players in these categories and thought, 'Okay, which one should I start with?' I went to the metal because I guess that's closer to my heart and I called the first five guys I had and it was Yngwie [Malmsteen], Zakk [Wylde, OZZY OSBOURNE, BLACK LABEL SOCIETY], Nuno [Bettencourt, EXTREME] and Tosin [Abasi, ANIMALS AS LEADERS] and they all said, 'Yup. I'm there. We're there.' They say the universe will provide. Well, there's my proof."

On whether he's thought of incorporating other styles of playing like the blues into this tour:

Steve: "That's what we're doing right now. I may not be a part of all of them because some of the genres, as a player, I fit into an odd box. I could probably contribute to any of those tours relatively well, but the rock and the metal ones seem to suit me best."

On the logistics behind "Generation Axe":

Steve: "The most challenging thing about doing a 'Generation Axe' tour is getting everybody's schedules today. These guys are all totally accomplished. They have their bands and their solo careers and they're constantly working and tour. Zakk, that guy is on the road all the time. So we have to project at least a year and a half in advance. It's a great show. It's a celebration of the guitar and the way that we present it, it is in a unique way. When I listen to the ['Generation Axe' live] record now, I hear all of these harmonies on some of the classic rock songs, it just really lights me up. There's some vocal tracks on the record — Nuno and Zakk are great singers. They do the song 'Sideways'. It's so gorgeous. Yngwie and I do a song together, it's called 'Black Star', it's one of his tracks. It's just a peak moment for me in the pantheon of my live touring experience. We just connected, and guitar players, they really love to hear that kind of thing. They're going to love this record."

On the last time he was truly impressed by someone's guitar virtuosity:

Steve: "[Laughs] I see that stuff all the time. With the advent of the Internet, people send me stuff and I see six-year-old girls playing these completely impossible guitar things and I'm just marveling at it. Even then, sometimes I'll look and go, 'How do they do that?' A part of me, of course, knows how, but the fact they branched out into it. There's been this constant evolution in the performance of the guitar. It's just crazy to see. People come into the world and they look around and they go, 'This is what everybody's doing, so this is where I got to start.' And you see these incredible things. I see it all the time."

On what it's like for him to jam with people he holds in high regard:

Steve: "It's kind of surreal. You mention Alice Cooper. When I was a kid, he was my main go-to for music for a big period of my life. I just loved the theatre in it, he's an incredible songwriter and Alice is just a cool guy. We used to just sit and listen to his music and do everything we could to get a ticket to go see his show which we could never go see back then because I was too young. All of the sudden, when you get a call from him, it's, like, 'Really?' Then it's like you're going to give this guy everything you've got. I've had some great encounters with Alice. He's fantastic."

Vai, Wylde, Malmsteen, Bettencourt and Abasi once again will join together to tour North America to stage 32 appearances across the country. Beginning on November 7 at the Fox Theater in Oakland, California, the run will return to markets where the inaugural tour was celebrated and hit several new cities for the first time. Each tour stop will include a variety of collaborations by the five players, including everyone performing together as one cohesive band with a rhythm section including Pete Griffin (Dweezil Zappa, Stanley Clarke, Edgar Winter) on bass, Nick Marinovich (Yngwie Malmsteen) on keys, and JP Bouvet on drums. Vai, Wylde, Malmsteen, Bettencourt and Abasi will perform songs from their various catalogs and join forces on some well-known songs (as well as probably a few unexpected, unearthed gems). Making this rare tour experience even more special, "Generation Axe" VIP packages will be offered, giving fans access to these guitars masters and exclusive one-of-a-kind memorabilia. A front row package (including a meet-and-greet),a meet-and-greet package, and a VIP tour package will be available.