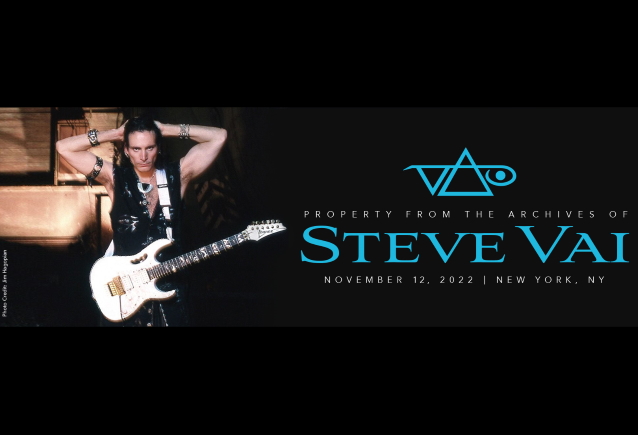 STEVE VAI: 'Property From The Archives Of Steve Vai' Auction Coming In November

Julien's Auctions, the auction house to the stars, proudly presents "Property From The Archives Of Steve Vai", an exclusive presentation honoring the legendary three-time Grammy Award-winning rock maestro, guitar pioneer, renowned axe-slinger for David Lee Roth, WHITESNAKE and Frank Zappa and collaborator with artists from PUBLIC IMAGE LTD. to Alice Cooper, taking place Saturday, November 12, 2022, day two of "Icons & Idols: Rock 'N' Roll", the world-record-breaking auction house to the stars' three-day event running Friday, November 11 to Sunday, November 13 live at the Hard Rock Cafe New York and online at julienslive.com. A portion of the proceeds will benefit "Kicking The Stigma", the Indianapolis Colts and the Jim Irsay family's national initiative to raise awareness about mental health disorders and to remove the stigma too often associated with these illnesses.

A spectacular collection of over 300 lots showcasing the rock and metal icon's instruments, gear, handwritten music, creative documents, wardrobe, and memorabilia from his groundbreaking recordings, live performances and media appearances, as well as artwork, personal items, and a custom motorcycle, coming directly from Steve Vai's home and studios in Southern California will take the auction stage.

Born June 6, 1960 in Carle Place, New York, Vai began his storied musical journey at the age of 12, taking guitar lessons from guitar master Joe Satriani, penning his first orchestral composition and playing in two local rock bands. While a student at the prestigious Berklee College of Music in 1978, he began transcribing compositions of Jimi Hendrix, Carlos Santana, and Frank Zappa, whom he sent a copy of his transcription of Zappa's technically difficult "Black Page #1". At the age of 18, Vai launched his professional music career as Zappa's regular transcriber and later joined Zappa's touring band and recording, in Zappa's words, "impossible" guitar parts on his various albums in the early '80s. Soon after, Vai embarked on his solo career and in 1984, released his debut solo album, "Flex-Able", on his own created record label Akashic Records. Immediately, his innovative and original guitar virtuosity began to attract public and critical attention. Vai's meteoric rise in the 1980s hard rock and heavy metal scene and dominance as one of the decade's best hard rock guitarists surged when he replaced Yngwie Malmsteen as the lead guitarist of the heavy metal band ALCATRAZZ, backed David Lee Roth and then WHITESNAKE as lead guitarist, starred as "Devil's guitarist" Jack Butler opposite Ralph Macchio in the 1986 film "Crossroads".

All this rocketed Vai to the top of many "best guitarist" lists, including those published by Guitar Player and Guitar World, and established him as an audience favorite in reader polls around the world. He also became known to the world as an innovator in guitar technology when he unveiled the groundbreaking Ibanez JEM — one of the longest-running, most successful signature series guitars in history — at the annual National Association of Music Merchants (NAMM) industry trade show in 1987 and another Ibanez collaboration, the seven-string Universe.

In the 1990s, Vai released his solo album "Passion And Warfare", which garnered the first of Vai's career thirteen Grammy nominations and widespread critical and popular acclaim, a rare feat for a largely instrumental rock album. He released five more studio albums, received his first Grammy in 1994 for his performance of "Sofa" on the tribute album "Zappa's Universe", co-headlined Joe Satriani's "G3" touring project, a celebration of guitar mastery that showcases top guitar talent, and founded both his Favored Nations record label and the Make A Noise Foundation, whose mission is to provide funding for musical education.

In the 2000s, Vai unleashed an unprecedented series of career defining works including several compilation and box sets, many masterful live releases and more. He was awarded an honorary doctorate from Berklee College of Music and became more actively involved in orchestral music, working with various ensembles around the globe to bridge the gap between the realms of rock and classical music. His project The Aching Hunger, undertaken with the Netherlands' Metropole Orchestra, led to "Sound Theories Vol. 1 & 2" and the "Visual Sound Theories" DVD, and in 2007, he celebrated the 20th anniversary of the production of the Ibanez JEM. In 2008, he began production on his signature Jemini distortion pedal with Ibanez, and in 2011 set a Guinness World Record for the world's largest online guitar lesson with his course offered through the online education division of Berklee College of Music. From 2012 to the present, Vai has continued touring around the world, including his 254-engagement "The Story Of Light" tour and "Generation Axe" with fellow rock luminaries Tosin Abasi, Nuno Bettencourt, Yngwie Malmsteen and Zakk Wylde. In 2022 Vai released his tenth studio album, "Inviolate", which debuted at No. 1 on the Current Hard Rock Albums chart (his first No. 1 album),No. 8 on Top Hard Rock Albums, and No. 40 on Top Album Sales.

Vai is one of the most sought-after musicians and collaborators of all time, working with some of the world's most legendary artists across all genres of music, from PUBLIC IMAGE LTD.'s "Album" and Alice Cooper's "Hey Stoopid" to Al Di Meola's "Infinite Desire" and Joe Jackson's "Symphony No. 1", in addition to appearing on releases from Ozzy Osbourne and Meat Loaf. He has appeared on "The Tonight Show With Jay Leno" and "Hell's Kitchen", and performed on "American Idol" with Mary J. Blige, Travis Barker, Randy Jackson, and his pop protégé Orianthi. Vai's work has been featured in film and video game soundtracks, including "Bill And Ted's Bogus Journey", "Encino Man", "PCU" and "Ghosts Of Mars", as well as the wildly popular theme from "Halo 2", "Mjolnir Mix". He most recently collaborated with LIVING COLOUR on a remake of their mega hit "Cult Of Personality".

In addition to his three Grammy Awards, Vai has received numerous awards and honors throughout his career, including, honorary doctorates from Berklee and the Musicians Institute and the TEC Foundation's Les Paul Award for excellence in the creative application of technology (past recipients include Paul McCartney, Neil Young, Herbie Hancock and STEELY DAN). In 1999, he was honored on the Hollywood Rock Walk Of Fame and was inducted into the Long Island Music Hall Of Fame in 2016. He was voted the 10th "Greatest Guitarist" by Guitar World magazine and has won over 15 honors from Guitar Player magazine.

Martin Nolan, executive director/CFO of Julien's Auctions, said: "Steve Vai is one of the most influential and innovative musical geniuses of all time who has ruled the rock and metal scene and set the bar high for guitar virtuosity for nearly half a century. His signature sound, style, and reputation as one of the guitar world's most towering figures is unmatched and will be well represented in his epic collection headlining Julien's 'Icons & Idols Rock N' Roll' event this November."