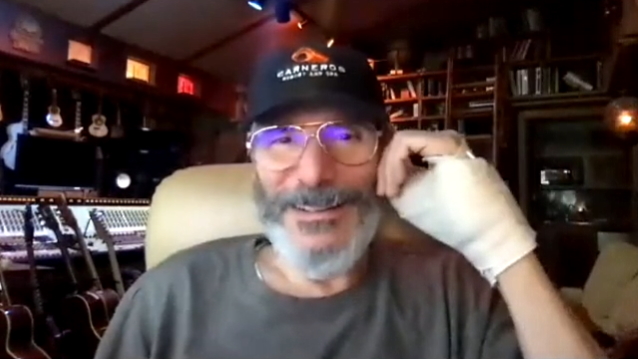 Speaking about his current and upcoming projects, the 60-year-old Vai, who recently underwent trigger finger surgery, said: "I always had this desire to one day just do an acoustic record — just me playing acoustic guitar and singing; nothing virtuostic [sic]. There's a certain melody DNA that I have that whenever I come across a song idea that falls into that category, I kind of put it on the shelf under a different category. And I had a whole bunch of these, and I said, 'Okay, now it's time to make this acoustic vocal record with these songs.' So, that's what I'm working on. But I also have all the songs put aside and ready to record for an instrumental guitar record that I'm hoping will be the next record I work on. And then a tour. Like every other artist, I'm itching to get back on tour. And I've got a huge tour booked. We just don't know when we can start... [It will be] about 250 shows in about 52 countries. I have the itinerary, but it just keeps moving."

He continued: "The other project I'm working on that I'm very excited about is I'm recording a bunch of my orchestra music. I've got about four hours of orchestra music that I've had performed and I've had recorded, but I wasn't really crazy with the recordings. It's for a series of records that I'm releasing called 'Sound Theories'. And I've released 'Sound Theories Vol. I & II'. And now, with this music, once it's recorded, I'll have enough, I think, probably up to 'Vol. VI' — I'll have 'III', 'IV', 'V', 'VI' [and] maybe 'VII'. I'm really excited about that."

In September 2019, Vai released a Blu-ray edition of his 2015 live DVD, "Stillness In Motion", via his personal record label Light Without Heat, distributed by The Orchard. The release features Vai's complete performance at Club Nokia in Los Angeles on October 12, 2012.