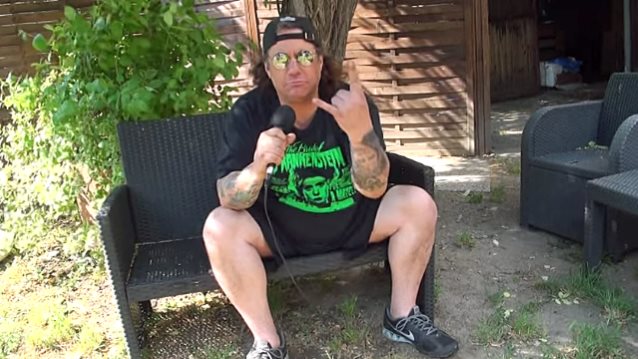 STEVE 'ZETRO' SOUZA On Being In EXODUS Again: 'It's Been Everything I Wanted It To Be'

Planet Metal conducted an interview with vocalist Steve "Zetro" Souza of San Francisco Bay Area thrashers EXODUS before the band's June 12 concert at Szene in Vienna, Austria. You can now watch the chat below. A couple of excerpts follow (transcribed by BLABBERMOUTH.NET).

On what it's been like playing with EXODUS again since he rejoined the band in June 2014:

"It's been everything I wanted it to be. I mean, we've been touring constantly. We did a record [last year's 'Blood In Blood Out'] — a great record came out — so I'm having a lot of fun with it. It's the best time for me so far. Out of all… the initial time, the period between [2004's] 'Tempo Of The Damned' and now, it's the best time for me."

On how "Blood In Blood Out" compares to "Tempo Of The Damned":

"I think, actually, I like the album the best, out of all the EXODUS albums. Out of 'Tempo Of The Damned', 'Fabulous Disaster' [1989], 'Pleasures [Of The Flesh]' [1987], 'Bonded [By Blood]' [1985]… I love 'Blood In Blood Out' the best. I think it's the fastest album — definitely back to sheer EXODUS violent, brutal brutality. I think everybody's musicianship in the band is definitely the best it's ever been, as far as that's concerned. So I think that everybody's just playing really well."

On HEATHEN's Kragen Lum filling in for guitarist Gary Holt on EXODUS's current tour due to the latter's commitments with SLAYER:

"I think Kragen does a great job of being Gary's stunt double. So it works out really well. And, as you'll see tonight, the songs are really tight, and the set's really good. And it's a good bevy of what we've done over the last thirty years, so…"

On whether it's too much work for Gary to handle both SLAYER and EXODUS:

"I think maybe at this point, right now, because there is a new SLAYER record that's coming out and EXODUS has a record that's only been out seven or eight months. So that doesn't normally happen all the time. So I'm sure, in the next year, in the next few years, or a year or so, it'll break off. Gary will play with us again. This is Gary's band; everybody knows that. So, it's just… SLAYER does have a new record out, so he does have commitments with SLAYER."

"Blood In Blood Out" sold around 8,800 copies in the United States in its first week of release to debut at position No. 38 on The Billboard 200 chart. Released in North America on October 14, 2014 via Nuclear Blast, the CD art was illustrated by Swedish artist Pär Olofsson, known worldwide for his incredible renderings that have graced the covers of countless heavy metal albums, including EXODUS' "Let There Be Blood".

"Blood In Blood Out" is EXODUS' first album since the departure of the band's lead singer of nine years, Rob Dukes, and the return Souza, who previously fronted EXODUS from 1986 to 1993 and from 2002 to 2004.