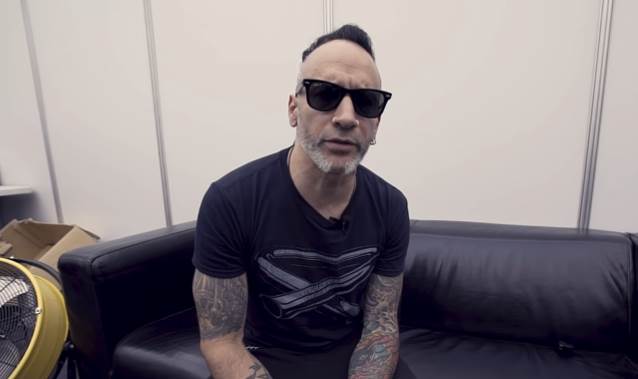 STONE SOUR Drummer On COREY TAYLOR: 'I've Never Seen Anyone Work As Hard As He Does'

STONE SOUR drummer Roy Mayorga was recently interviewed by Metalshop TV. The full conversation can be seen below. A few excerpts follow (as transcribed by BLABBERMOUTH.NET).

On the success of the band's recent touring:

Roy: "It's been awesome. Off the charts. This whole run, the past year and a half we've been out, it's been probably one of the best tours we've done ever. It's been great."

On whether he feels as strongly today about the group's latest album, "Hydrograd", as when it was released:

Roy: "Absolutely. I definitely do. We're definitely still excited to play it. We're just stoked to be out here, to be able to do this still and earn a living at it, doing what we love to do."

Roy: "[We] used big takes instead of, like, parts. We played the songs seven to nine times and went with the best take, and then built from there. We did everything live, pretty much. We did that when we demoed the songs at my house, so we figured, 'Let's take the same approach.' It just felt better, natural. I think what we put out on the record is pretty much everything we wanted to say, everything we wanted it to be."

On whether the band has started writing new music:

Roy: "That's not even in our heads right now. Right now, what's in our heads is just to continue out this tour cycle until the end of the year and then part ways at the end of that, and rejoice later. I'm sure in the interim of it all, on the break, we'll get together and hash out ideas and write stuff while Corey [Taylor] is off doing SLIPKNOT, like we did the last record. He would come in on breaks with SLIPKNOT and record, like, a group of songs that we'd had and sit with those for a while, and then record another batch and so on."

On coexisting with SLIPKNOT:

Roy: "I think it's great for both bands. It gives both bands time to recharge and get inspired and write good stuff. I'm all about it. The only person who doesn't get a break is Corey. I've never seen anyone work as hard as he does. He's a fucking machine. He's one of the best frontmen/musicians I've ever worked with. It's inspiring to watch him do what he does. When he's not doing STONE SOUR, he's off writing a book or he's off doing a solo acoustic show. He's a workaholic. It's great — it's inspiring."

Roy: "I respect the band, but it's not really what I listen to. I don't listen to a lot of the kind of music in the genre that we do when I'm at home. I listen to other stuff. I listen to a lot of older music that I grew up on, so I can't really... I don't care [about Kroeger's comments]. It's whatever. It's media having fun, and I'm not about it. All I care about is getting out there and playing my instrument and making people forget whatever their troubles are for the day for an hour and a half. That's all I give a fuck about."

On finding a permanent home with STONE SOUR after years of playing with numerous groups:

Roy: "Beforehand, my whole musical life up until 13 years ago, I've always been a hired gun in every band I've been in. Even if I felt like I was a part of it, I was still at the end of the day a hired member. Most of the time, the bands I would be in, they would last for a year or two years, so I was always on that path of trying to find the right home to stick with, and the home that would last a little longer. STONE SOUR is the longest band I've ever been in. I've never been a band longer than two years. This is my home, and it's always going to be my home. I'm happy that this is my home. Six records later and two EPs, I'm still here. I ain't going anywhere."

STONE SOUR recently unveiled details of a deluxe release for its acclaimed 2017 LP, "Hydrograd". The two-disc set, "Hydrograd Deluxe Edition", collects unreleased covers, b-sides, live recordings and alternate versions of songs from "Hydrograd". Available for pre-order along with a new exclusive t-shirt at StoneSour.com, the deluxe edition is highlighted by "Burn One Turn One", a previously unreleased b-side from "Hydrograd". "Burn One Turn One" is also available as an instant-grat download with all pre-orders. Fans can also pre-order signed physical copies of "Hydrograd Deluxe Edition" via PledgeMusic.