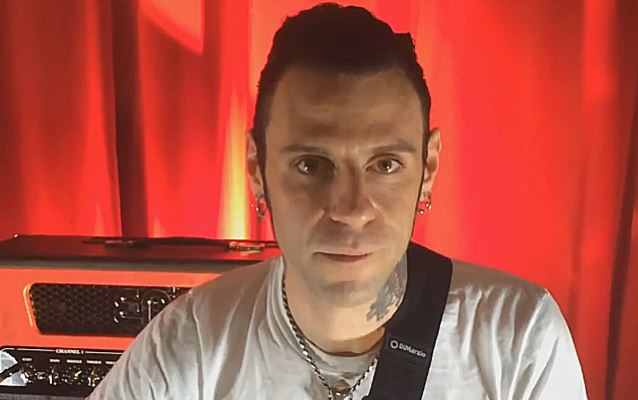 In the four-minute video below, STONE SOUR guitarist and ENGL endorser Christian Martucci explains why he decided to use the Retro Tube 50 head live on stage and he also shows you how it sounds.

Martucci joined STONE SOUR in late 2013 as the replacement for Jim Root, who was fired from the group after deciding he wanted to sit out the band's last tour in order to start work on the next album from SLIPKNOT, of which he is also a member.

As previously reported, STONE SOUR has set "Meanwhile In Burbank" as the title of its upcoming covers album, which is tentatively due out before the end of the year. The group recorded some of the set at a Burbank, California studio owned by STONE SOUR drummer Roy Mayorga. There's no word yet on which songs the band intends to include on the disc, which STONE SOUR has had in the planning stages for years.

Singer Corey Taylor said on "The Jasta Show" podcast about the record, "This is something that we've been talking about since the first album came out, with STONE SOUR. We've always wanted to do this. Even as people have come, people have gone, this is still something we've always come back to, and we just never had the opportunity to do it. And we just kind of said, 'Well, screw it.'"

Taylor added, "You're going back to these songs that you just love to listen to, not only just sing. And that's why it's called 'Meanwhile In Burbank', because, without giving too much away, that's where Roy lives — he lives in the Valley — so that's why we call it that. Because it's, like, that's what we're doing right now."

On its last North American tour, STONE SOUR played a different cover every night, including METALLICA's "Creeping Death", KISS' "Love Gun", JUDAS PRIEST's "Heading Out To The Highway" and PETER GABRIEL's "In Your Eyes".