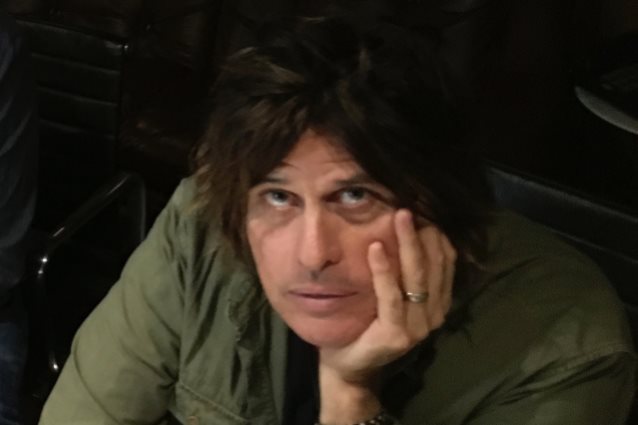 STONE TEMPLE PILOTS guitarist Dean DeLeo, who is currently promoting the twenty-fifth-anniversary expanded reissue of the band's debut album, "Core", was asked in a new interview with Variety what emotions he had listening to these songs almost two years after the passing of the group's original singer, Scott Weiland. "It's pretty much every emotion," he responded. "It's sadness, it's anger, it's intense, it's joy, it's love. It's every emotion that the guy who had such a huge flow and such success with this band, and is not here to tell you about it. I hate it. I can't stand it, man. It's like, 'Really man? You had to take it there?' And that's what's tragic about the situation right now because, everything else about it is really, really beautiful. But, heck man.

"If there's one thing I could have changed back in the day, it would have been to just ask for Scott to have somewhat of a full heart and a peaceful mind," Dean said.

"Scott was an extraordinary human being. Like, anything that guy did, he excelled at. And I know there was a lot of noise in that guy's head, man. And when he found things that would take down that noise and squelch that fuzz, that's where he found his peace. And sadly, it killed him."

STONE TEMPLE PILOTS confirmed in a recent interview with Rolling Stone that they are working with a new vocalist and hope to announce his identity in the next few weeks.

STP has been without a singer since November 2015, when Weiland's replacement, Chester Bennington — who joined in early 2013 — departed to spend more time with his main band LINKIN PARK.

Chester recorded one EP with the band, "High Rise", and did a handful of tours during his tenure. He died by suicide on July 20. He was 41.

"For the rest of our days, we're going to miss those two guys immensely," Dean told Yahoo! "You record music with somebody, you write music with somebody — that's very intimate. You're really putting all of yourself out there, and you're very vulnerable. These are two men that we had the luxury and honor of doing that with for many years, so we're really, really going miss those guys. A lot."

STP last performed live, with Bennington on vocals, for a one-off reunion performance in California in March 2016.

The band held an open call for singers last year, reportedly receiving thousands of submissions and narrowing that down to a handful of prospects with whom the group members got together to jam.