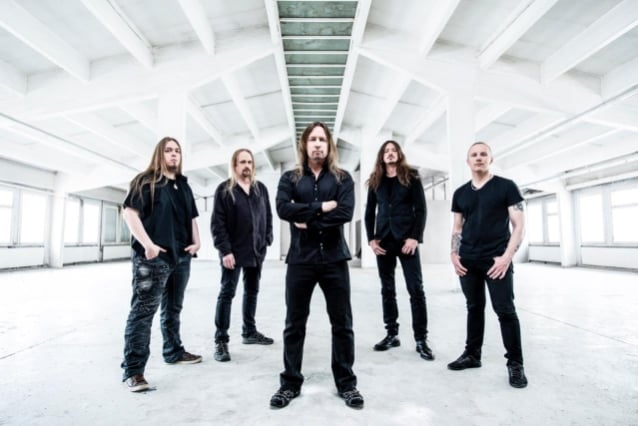 earMUSIC will release STRATOVARIUS's new studio album, "Survive", on September 23. The official music video for the LP's title track can be seen below.

Seven years after the release of its last album "Eternal", STRATOVARIUS once more proves its status as a flagship symphonic metal band and it returns with a big bang.

The band remains on the pulse of time with the new release. The environment and humanity's future have always been an important and recurring theme in STRATOVARIUS's music. Therefore, "Survive" — the title of the new album and the accompanying artwork — aren't surprising, especially in the view of the current global situation.

A blistering comeback from one of Finland's most seminal metal bands, "Survive" is full of dynamics and drama, feeding on a wide range of emotions along the way. But the core message that this triumphant sonic endeavor conveys is one of struggle, defiance, hope, and victory. Best exemplified by its profoundly rousing title track, "Survive" is the STRATOVARIUS spirit in exquisite musical form, with all the darkness and light that goes with it.

"We spent five or six days solid, trying to come up with the lyrics for that song," notes keyboardist Jens Johansson. "When we finally settled on that punchline for the chorus, it was a good song about survival, and it all just seemed to fit. It fits with the history of the band, too, because we managed to survive as long as we have.

"This band has been through some strange days! The original lineup formed in 1984, so it's been a long story. It was the middle of the summer, there were forest fires everywhere, there was a global pandemic, and all kinds of crazy shit was going on. Some of the lyrics are perhaps less uplifting than they could have been, but that reflects our mood at the time. There's a lot of positive stuff on there as well."

STRATOVARIUS gained international success with albums like "Fourth Dimension" (1995),"Episode" (1996) and the epic project "Elements, Pt. 1" (a peak in the progressive and symphonic style of power metal) and "Elements, Pt. 2", to name just a few of the band's milestones. In 2009, "Polaris" marked a fresh start for STRATOVARIUS as guitarist and band leader Timo Tolkki left the group. Instead of being a difficult re-start, "Polaris" showed STRATOVARIUS in top form and perfectly able to captivate. The album became a hell of a comeback and charted higher than previous releases around the globe. Since then, STRATOVARIUS continue to walk the path of success, inspiring fans and other bands, young and old.