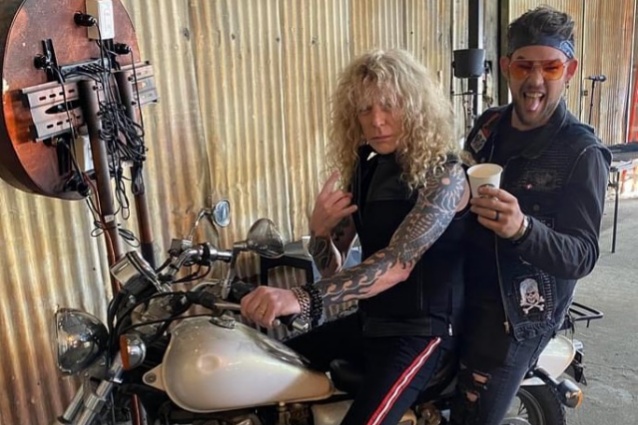 FAITHSEDGE singer/songwriter Giancarlo Floridia, who was involved in the songwriting process for CLEANBREAK, took to his Facebook on Wednesday (March 16) to write: "After months of not being able to say anything I’m proud to announce my songwriting debut for Frontiers records. These new songs will be on the CLEANBREAK debut album featuring 'American Idol' finalists James Durbin, STRYPER drummer Robert Sweet, FIREHOUSE/STRYPER bass player Perry Richardson and the guitar monster Mike Flyntz of RIOT!

"It's an amazing thing to be writing songs for your multi platinum MTV heroes and I know you guys are going to love the result.

"Thank you Alessandro for taking me on board and thank you Seann Nicols for helping me with all the demos for the album.

"I am hoping to bring to the songwriting table my history of working with band members of STRYPER, RATT and yes DOKKEN. And there is more to come as I am working on more songs with Alessandro !!

"Please join the CLEANBREAK Facebook page or Instagram page below ! Never ever ever ever give up on yourself to my friends! Now let's rockkkkkk !!!"

Durbin recorded two studio albums with QUIET RIOT — 2017's "Road Rage" and 2019's "Hollywood Cowboys" — during his three-year stint with the group. In September 2019, QUIET RIOT parted ways with Durbin and replaced him with Jizzy Pearl. Pearl previously fronted QUIET RIOT from 2013 until October 2016, when he was briefly replaced by Seann Nichols, who played only five shows with the group before the March 2017 arrival of Durbin.

Richardson joined STRYPER in the fall of 2017 as the replacement for longtime bassist Tim Gaines.

After months of not being able to say anything I’m proud to announce my songwriting debut for Frontiers records. These...