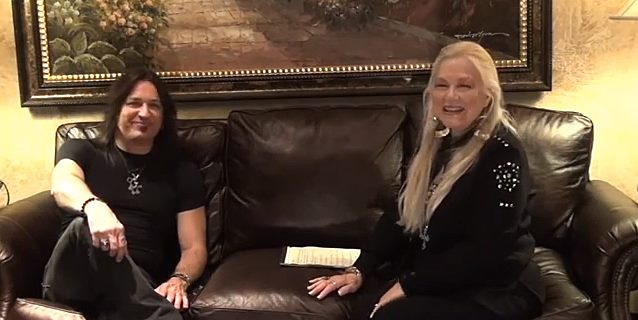 Guitarist/vocalist Michael Sweet of Christian hard rockers STRYPER was recently interviewed by his mother, Janice Sweet. You can now watch the chat below.

STRYPER's new album, "No More Hell To Pay", will be released on November 5 in North America via Frontiers Records. The effort will be made available in two formats — standard CD and deluxe digipak featuring exclusive video content. Produced by Michael Sweet himself, the set features some of STRYPER's strongest and heaviest material ever.

Michael's new solo album will be issued via Big3 Records. Guest musicians set to appear on the CD include CHICKENFOOT drummer Kenny Aronoff, FOZZY singer Chris Jericho, WHITESNAKE guitarist Doug Aldrich; Tony Harnell of TNT, and Michael's brother Robert Sweet and STRYPER's Timothy Gaines. The 12-song solo record will be accompanied by the STRYPER frontman's autobiography, "Honestly", the writing of which he said was "much more difficult than I could ever imagine yet it's been somewhat therapeutic being able to talk about my life and the past 30+ years of all things STRYPER." He added: "I get into everything and share things that may surprise you. I talk about the dysfunction in this band, the pain and heartache of being so close to each other that we sometimes hurt each other the most, the ups and downs from our highest point (1987-1988) to our lowest point (1991-1992) and why we were driven to bankruptcy and how we climbed our way back from complete loss and despair. I share my personal pain from considering to give up music altogether to the day I broke the news to the guys that I would be leaving the band and why. From that day forward, I had everything a man could ask for and then, in what seemed like an instant, it was all taken away."