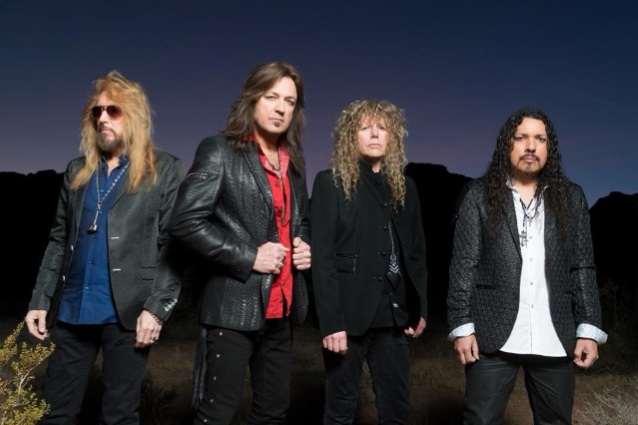 STRYPER's music video for the song "The Valley" can be seen below. The track is taken from the band's new album, "God Damn Evil", which will be released on April 20 via Frontiers Music Srl. Produced by frontman Michael Sweet, it is STRYPER's most powerful album to date, doubling down on the hard rock/heavy metal sound that earned the group a worldwide fan base.

Asked by All That Shreds what made STRYPER choose such a seemingly provocative title for its follow-up to 2015's "Fallen", Sweet said: "We didn't do it just to shake things up. We have a point to prove in a statement. A few years back we thought about using this title. We didn't go with it because we felt it was a little too much at that time. Now in 2018, with everything that we've seen on the news, the evil we're faced with on a daily basis to new levels and new degrees, it made perfect sense for us to have an album called 'God Damn Evil'. It's a prayer request. It is what it is. It's not a swear, it's not just the shock statement, it's a prayer request, and we're asking God to damn the evil that we see. It should be a prayer for everybody. Some people are freaking out thinking you're taking the Lord's name in vain, and it's not that at all."

"We all see and hear the darkness that surrounds us in our society, but with faith and love, we'll always have hope," he continues. "That's what STRYPER is all about: powerful music and a message that builds foundations, not walls. We couldn't be more excited about 'God Damn Evil', as it showcases our undying love for what we do and why we do it."

The follow-up to 2015's "Fallen" marks STRYPER's first effort since the addition of former FIREHOUSE bassist Perry Richardson. Perry joined the band as the replacement for STRYPER's longtime bassist Tim Gaines, who was fired from the group last year.

STRYPER will return to the road this year, kicking off the "God Damn Evil" world tour in Milan, Italy on April 28 at the Frontiers Rock Festival.