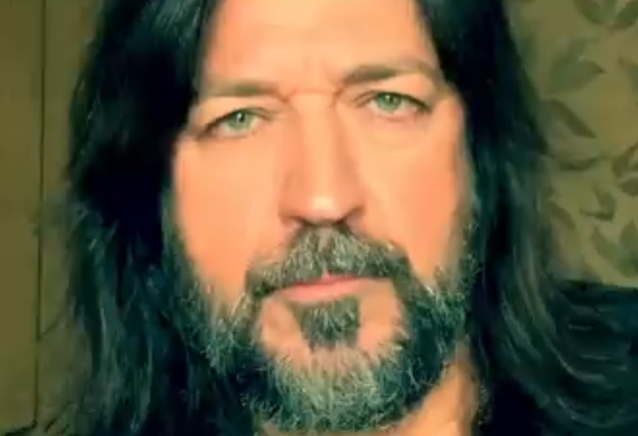 STRYPER frontman Michael Sweet has just received his first dose of the COVID-19 vaccine. On Wednesday (April 14),the 57-year-old guitarist/vocalist, who lives in Massachusetts, took to his Twitter to share a picture of him holding up a pin that reads "I Got Vaccinated At Gillette Stadium" after he got the shot, and he wrote in an accompanying message: "First one down, second one to go. I Wanna Rock."

Last December, Sweet admitted that he was a little wary of the new, rapidly developed COVID-19 vaccines. Asked in an interview with "Rocking With Jam Man" if he would get the vaccine once it became available, Sweet responded: "I don't know. To be honest with you, I'm not sure. It's one of those things where I wanna wait at least a little while just to make sure that they've got all the — for lack of a better way of putting it — bugs worked out. And I'll be honest with you too — I'm a little apprehensive, 'cause I'm one of those guys, whenever I get a flu shot, I get sick. So I don't do well with vaccines. And I'm a little concerned. I heard a story about someone in Brazil who got a COVID vaccine and they got sick and they died. Now, I don't know if that was related directly to the vaccine itself.

Over 120 million Americans — more than 48% — have received at least one dose of the three vaccines, according to the Centers for Disease Control and Prevention.

Johnson & Johnson's vaccine, which became available in the United States last month after the U.S. Food and Drug Administration gave it emergency use authorization, was tested with new variants of COVID-19, and has shown to be effective against them; Pfizer and Moderna were tested prior to the emergence of these variants.

First one down, second one to go👍 I Wanna Rock👊 pic.twitter.com/jf546SPt72