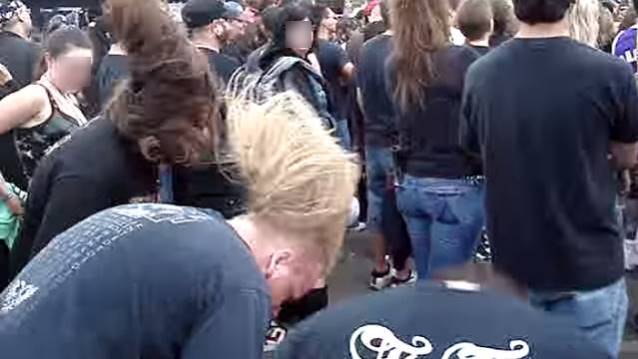 Study: Headbanging Can Cause Brain Injury

According to The Daily Beast, a new case study published in the medical journal Lancet has revealed that headbanging — described as violently shaking the head in time with the music, most commonly in the rock, punk and heavy metal music genres — can cause damage as the brain bumps up against the skull.

The study detailed the case of a German heavy metal fan suffered bleeding in the brain after a night of headbanging at a MOTÖRHEAD concert. The 50-year-old complained of a two-week constant headache while being treated at Hannover Medical School and told doctors that he had been headbanging regularly for years. A CT scan showed he suffered from bleeding — medically known as chronic subdural haematoma — on the right side of his brain.

"We are not against headbanging," said Dr. Ariyan Pirayesh Islamian, one of the doctors who treated the patient. "The risk of injury is very, very low. But I think if (our patient) had (gone) to a classical concert, this would not have happened."

"There are probably other higher risk events going on at rock concerts than headbanging," Dr. Colin Shieff, a neurosurgeon and trustee of the British brain injury advocacy group Headway, added. "Most people who go to music festivals and jump up and down while shaking their heads don't end up in the hands of a neurosurgeon."

MEGADETH mainman Dave Mustaine is one of several musicians who have spoken about the harm they caused themselves by headbanging on stage. He tried to cope with the pain caused by stenosis — a narrowing of the spinal column — for nearly 10 years through acupuncture, yoga, trigger-point injections, and both narcotic and non-narcotic medication, but ultimately underwent minimally invasive spine surgery in 2011 to fuse a disc in his cervical spine. He said: "I had to have my neck fused — the vertebrae in my neck — from the damage that headbanging has done over the years. It had degenerated the discs. When they were taking out one of the discs to replace it, they discovered a big bone fragment that had broken off and was pushing against my spinal column. It was very painful."

SLAYER frontman Tom Araya underwent back surgery in early 2010 after experiencing back problems while on the band's Australian/New Zealand/Japanese tour in October 2009. The rocker initially did not want to take the major surgery route, so the specialist recommended a series of minimally invasive procedures. While those procedures resulted in some improvement, Araya continued to deal with intermittent bouts of severe pain, numbness and muscle spasms. The surgical procedure that Araya underwent, called an Anterior Cervical Discectomy with Fusion, was a relatively routine practice.

"I can't headbang anymore," Araya explained in an April 2010 interview with Noisecreep. "When they diagnosed me, they found I was herniating to the left, and normally it's to the back. That was caused by headbanging. I'm an advocate of moderate headbanging now." He told KNAC.COM a month later: "Yeah, I just can't [headbang]. With a plate in your neck, it's not a good idea to do that. The only disclaimer I can have for people is there's nothing wrong with headbanging, just do it in moderation. And understand at some point it could damage you. People are gonna do what they wanna do, and as long as they are aware that this could happen to you, then they have a choice. I'm still gonna rock out, I just won't be able to metal out. [laughs]"