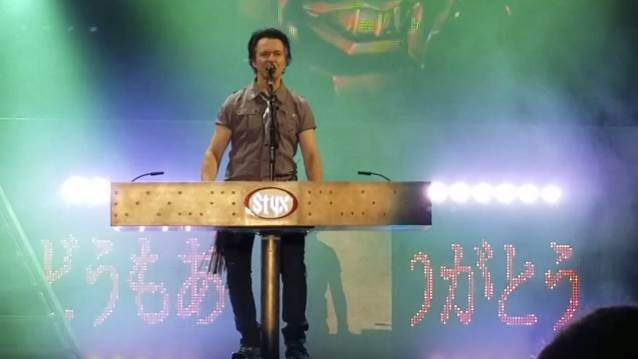 STYX Plays 'Mr. Roboto' Live In Its Entirety For The First Time In 35 Years

Last night (May 30),at the opening show of their summer tour with TESLA and JOAN JETT & THE BLACKHEARTS at FivePoint Amphitheatre in Irvine, California, veteran rockers STYX began their encore with "Mr. Roboto", the first time the group has performed the song live in its entirety in 35 years.

"Mr. Roboto" — which originally appeared on STYX's 1983 concept album "Kilroy Was Here" — was written by former vocalist Dennis DeYoung, who left the group in 1999. The song reached No. 3 on the Billboard Hot 100 and topped the charts in Canada, but guitarist Tommy Shaw's reported dislike of the song and direction of the group's concert performances — which, in keeping with the album's concept, featured bandmembers acting out certain roles — led him to leave the band at the completion of the "Kilroy" tour. He eventually returned in 1996.

Asked in a 2017 interview with SongwriterUniverse how he came up with the idea for "Mr. Roboto" and "Kilroy Was Here", DeYoung said: "It was in the news that these fundamentalist brothers in Nebraska or Iowa were burning records because they claimed the records had backward Satanic messages. And we were lumped in there, not because of what were doing, but because of our name, STYX. Then I saw on the 'Nightline' TV show and on the Phil Donahue show, they were talking about censorship, because these people wanted all these records burned. So I was thinking about this. But then we went to Japan, and what I realized in Japan was that the Japanese people were quite polite. They have a very formal, structured society that is based on respect and dignity and politeness. And 'domo arigato' (which means 'thank you very much') is said everywhere you go. And then… I don't even know how it happened, but I realized that the word for 'robot' in Japanese was 'roboto.' So I come home, and I see a PBS documentary on the use of robotics in factories. And there's this guy in this gigantic factory room, and the machines are [active] with the arms moving, like a stamping plant. And there's only one guy in the whole place in this huge room. And then the machines are going, and he goes to leave, and as he's leaving, he opens the door, turns off the lights in the room and closes the door. And all you hear are the machines continuing to work. And I started to think… at some point, man must make a bargain with the machines he creates. And I took those three ideas: music censorship, technology, and Japanese, and created a 12-page story I wrote (to explain the story of 'Kilroy Was Here'). It was extremely involved."