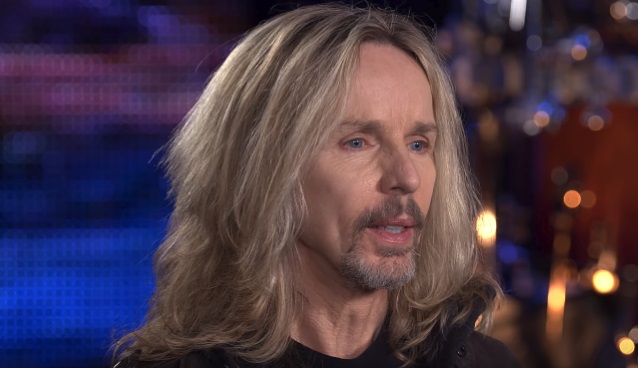 STYX's TOMMY SHAW Rules Out Reunion With DENNIS DEYOUNG: 'Personality-Wise, I Want To Be Happy'

Tommy Shaw, James "JY" Young and Lawrence Gowan of STYX sit down with Dan Rather for a revealing conversation as they open up about the driving force that compels them to continue touring and performing in an all-new episode of "The Big Interview", airing Tuesday, April 17 at 9 p.m. EST / 6 p.m. PST on AXS TV.

Armed with a roster of hits, including "Come Sail Away", "Renegade", "Blue Color Man" and "Too Much Time On My Hands", a passionate fanbase, and the impressive distinction of being the first band in history to achieve four consecutive multi-platinum albums, STYX is one of the most influential and beloved bands in rock. After over 46 years in the industry, there isn't much that the band has yet to accomplish. Asked why they still continue to do what they do after all of these years of tremendous success, guitarist Young thoughtfully explains: "We're meant to bring this music — which comes from a higher place and is channeled through us and has the power to soothe, to calm, to inspire, and, in the best cases, to heal. We are the stewards of this mighty power, and it's our great joy to get out here and use that power."

"I would also add that we're completely unqualified to do anything else on the planet," says frontman Gowan, leading singer and guitarist Shaw to humorously chime in: "My charm wears off pretty quickly at home. I don't recall my wife ever being in tears when I left again."

In addition, Shaw and Young explain to Rather their rocky relationship with former STYX frontman Dennis DeYoung. Though many of the band's biggest hits were written during DeYoung's tenure, creative differences ultimately led the band to shake up the roster, causing DeYoung's official exit in 1999. On the possibility of DeYoung rejoining the band in the future, both Shaw and Young are a firm negative, with Shaw likening their relationship with DeYoung to a divorce. He says: "You get married when you're young and everything's rosy. Then, as you start to get a little older, you realize you didn't have that much in common and then you go through a tough divorce… We still have songs that we co-wrote together, and those are our children, and we've managed to find a way to keep those things in play."

Shaw is content to let the past remain in the past, choosing instead to surround himself with positivity as he enters the next part of his career. He continues: "Personality-wise, at this stage in my life, I want to be happy. I want to be around people who love me and that have my best interest at heart, and I don't have to fight with. There's just not enough years left that I would want to risk not having that again."

Gowan took over on lead vocals following DeYoung's dismissal, and he has now been with the band longer than their previous frontman. While he has heard all of the stories surrounding the band's tumultuous partnership with DeYoung, he prefers to look at it as just one part of the journey that has led STYX to becoming one of the most iconic acts in the history of rock. Gowan explains: "I hear the angst and the history that they had to live through as a band, and I'm respectful of that… I look at it as if we are a great band, and what's made us great is that we are the culminations of the efforts of everyone who's been in the band… Sometimes in life you need a blood transfusion. Although I'm Canadian, apparently I was a match."