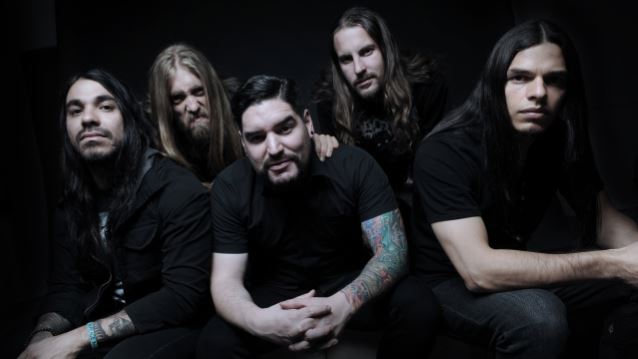 SUICIDE SILENCE Frontman On Self-Titled Album: 'We Are Really Trying To Push The Boundaries'

Metal Mark of Ghost Cult recently conducted an interview with vocalist Hernan "Eddie" Hermida of California deathcore masters SUICIDE SILENCE. A couple of excerpts from the chat follow below.

Ghost Cult: Since [the new SUICIDE SILENCE self-titled album] is such a drastic change for the band's sound, I have to ask when this idea first came about. Was it recently or has this been a long time coming?

Hermida: "Honestly, I would say before I was even in the band. The guys have been big fans of all forms of metal, and they've always been about pushing the boundaries of their sound. Over the past few years, we've seen the different genres of metal become stale renditions of themselves. The big names from death metal, deathcore, hardcore or whatever other genre were always pushing the envelope, but it doesn't seem like that anymore to us. Bands know how to write that certain sound, and fans dig it, so they are going to keep writing it. It's easy and successful, but it's not what we are about. We want to make people think, and bring something new to the table."

Ghost Cult: You guys have talked before about how [producer] Ross Robinson pushed you guys and brought the best out of you. For you personally, what did he bring out of you that you didn't think was possible?

Hermida: "Ross is good at making you think. He can stare you straight in the eye and ask you 'Why you're here?', and it means more than just those words, you know. He makes you find things in yourself that were either hidden, or you didn't know was there. Personally, he brought out these raw emotions that I had built up inside, and made them explode on each song. All the despair, pain and torment that I had buried just flew out of me, and it was a surreal experience. There were feelings that I would have never brought up in a band before, but he made it okay, and that comfort really opened me up like never before. He really gave me more confidence as a vocalist and as a person, and beyond music, I'm forever grateful for that."

Ghost Cult: You've done clean vocals before, but never as much as is found on this record. Was that challenging for you in the studio, or did you knock it out pretty easily?

Hermida: "Every time you do something new, there are some nerves with it, but you just have to overcome it and do it. I didn't feel any extra stress while in the studio, but I did push myself like I never have before. For the first time in my career, I didn't focus on making everything perfect or doing something I know I can't handle. I just dove in feet first, as they say, and put it all out there. Listen to the early David Bowie records — he's singing from the top of his lungs, and you can feel every emotion in every word. I really wanted to do my best and match that. If I cared too much about the little things, you wouldn/t get that raw and honest feel, and so knowing that's what I wanted ahead of time really helped. It's hard not to care about every little detail, but in the end, it makes for a more personal experience for the listener, in my opinion."

Ghost Cult: Where does this record stack up with what you've done before?

Hermida: "Honestly, this is my most favorite thing I've ever done. One of the main reasons that I say that is because I'm such a huge fan of Ross Robinson. The fact that he produced a record I'm on is something else, man. It really is. It's a dream come true for me personally. The records that he's worked on shaped me as a man, and I remember sitting in my living room when I was younger going, 'Who the hell is this guy, and why is he producing all of my favorite records?' [Laughs] Now I totally get it, and to be able to put his name on our record is mind-blowing. Plus, the fact that I got to write an album like this with my brothers is special as hell. We are really trying to push the boundaries, and ourselves, and for any musician, I think that's what you are supposed to do. It keeps it fresh, and it keeps it fun, which is what music is supposed to be."

"Suicide Silence" will be released on February 24 via Nuclear Blast Entertainment.