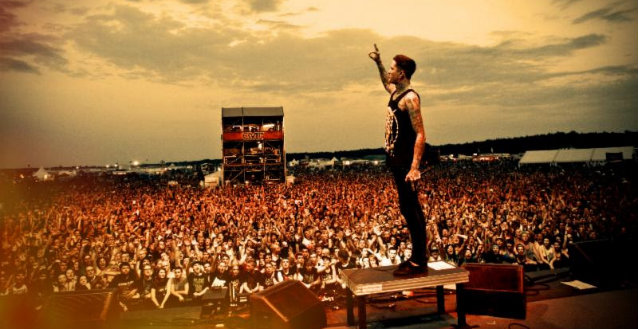 On December 21, 2012, the metal community came together in an amazing way to celebrate the life of SUICIDE SILENCE singer Mitch Lucker and raise money for his daughter's future education (with an unforgettable evening of collaborative performances between past/present SUICIDE SILENCE members and elite heavy vocalists that created a defining emotional event forever captured on video and audio.

"Suicide Silence - Ending Is The Beginning: The Mitch Lucker Memorial Show" will be released on February 18, 2014 in North America and March 17, 2014 In Europe as a CD/DVD digipack and CD/Blu-ray combo pack. Directed by Jeremy Schott of MentalSuplex Productions and Zafer Ulkucu of Backseat Conceptions, the concert's first official trailer can be seen below.

The official track listing is as follows:

01. Destruction Of A Statue (with Jonny Davy)
02. Distorted Thought Of Addiction (with Greg Wilburn)
03. Ending Is The Beginning (with Brook Reeves)
04. Bludgeoned To Death (with Ricky Hoover)
05. Unanswered (with Phil Bozeman)
06. Girl Of Glass (with Myke Terry)
07. Price Of Beauty (with Danny Worsnop)
08. No Pity For A Coward (with Johnny Plague)
09. Disengage (with Cameron "Big Chocolate" Argon)
10. No Time To Bleed (with Burke VanRaalte)
11. Smoke (with Anthony Notarmaso)
12. Wake Up (with Tim Lambesis)
13. March To The Black Crown
14. Slaves To Substance (with Eddie Hermida)
15. OCD (with Austin Carlile)
16. Fuck Everything (with Chad Gray)
17. Die Young (with Robb Flynn)
18. Roots Bloody Roots (with Max Cavalera)
19. Engine #9 (with Mitch Lucker)
20. You Only Live Once (with Randy Blythe)