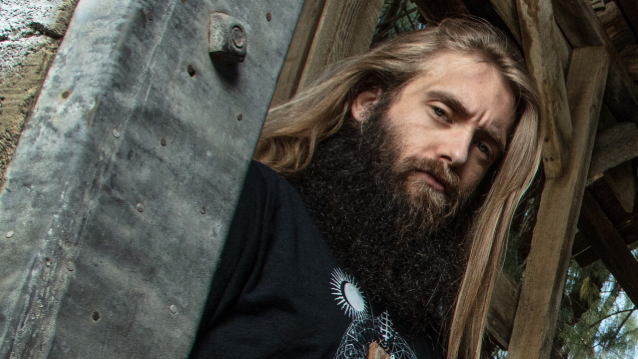 SUICIDE SILENCE guitarist Mark Heylmun recently spoke to RadioactiveMike Z, host of the 96.7 KCAL-FM radio program "Wired In The Empire", about the possibility of SLAYER returning for a reunion tour. The legendary thrash metal act completed its farewell trek last November, less than two years after announcing that it was planning to call it quits.

Asked for his opinion on whether SLAYER will ever come back as a touring entity, Mark said (hear audio below): "You can look it up, and it's going around so I'm not spoiling anything. I discovered this myself — people have caught [SLAYER guitarist] Kerry King's pick on that farewell tour and his pick said 'King 2020', and that tour was in 2019. [Editor's note: The Dunlop pick Mark is referring to actually had Kerry King's signature on it, along with "REBORN 2020".] So I think that that is alluding to the fact that Kerry King has a project that he's gonna… Maybe not now, because of what's going on in 2020, but I think that Kerry King's got something up his sleeve; that's what I think. I think SLAYER is probably done."

As for the likelihood of SLAYER returning for a one-off concert, Mark said: "I don't know. If they do, it will be unfortunate. They can't just go play one show, 'cause that would be a big middle finger to everything they did with their farewell. If they're gonna come back, they're gonna probably come back. But I don't think it'll happen. I don't think Tom [Araya, bass/vocals] feels the same way that he did about SLAYER. I think that's why he wanted to call it. I think he grew up. He's seen it all. He's a freakin' grandfather now. I'm pretty sure he's a newfound Christian, or whatever you wanna call it. Being disconnected from… SLAYER is not a Christian-dude band. [Laughs]"

Mark was also asked to comment on the possibility of a hypothetical tour featuring Philip Anselmo, Rex Brown and Zakk Wylde celebrating the music of PANTERA.

"I'm more for it than anything," he said. "I say why not do it? I do think that it would be cooler to see it as big-time appearances, on big festivals, but doing that at clubs and taking it around and playing too many shows with it? I don't really know. And I kind of think that Phil and his ILLEGALS band, on SLAYER's [last] tour, they played PANTERA songs. They [also] did clubs in South America. I kind of think Phil might be greasing it up and getting it ready to do a more proper reunion kind of thing. I kind of think that there's more to that story than we know right now, and I bet they're planning on doing it."