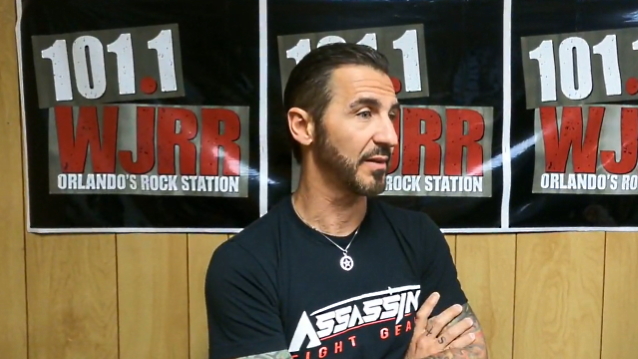 SULLY ERNA Opens Up About 'Gnarly' Battle With COVID-19, Says GODSMACK's Next Album Might Be Band's Last

Prior to GODSMACK's headlining performance at WJRR's Earthday Birthday 28 on Saturday, April 23 in Orlando, Florida, frontman Sully Erna opened up to Pat Lynch and Taco Bob from 101.1 WJRR about his recent battle with COVID-19, the disease caused by the SARS-CoV-2 coronavirus. He said (as transcribed by BLABBERMOUTH.NET): "I got very sick. I was sick for five and a half weeks, but I was in the hospital for four days."

When asked if he thought he was going to get COVID-19, Erna, who is apparently unvaccinated, said: "I didn't. I take really good care of myself. I'm a runner. I've boxed for over 20 years. And I'm onstage two hours a night. I have pretty big lungs, so even thinking if I was gonna get it, I figured I'd get sick like the normal flu get sick and then you push through it, but I definitely didn't expect for it to knock me down the way it did. I just got some bad luck and bad timing. Part of it was I got hit during the Christmas holidays, so all my doctors were on vacation; there was only substitutes. They were kind of guiding me over the phone. And what happened was the COVID left my body within seven to 10 days, but then pneumonia developed, and that's what got me [really sick]. I ended up getting blood clots in my lungs and stuff like that. That's when everything went down. It was pretty gnarly for a while because my oxygen had dipped to 76. And if anyone knows anything about oxygen levels, you're not supposed to go below 95. If you go below, you go to the hospital and 70 is, like, [when they put you on a] ventilator. So I was pretty emotional, pretty nervous about wondering if I was coming out of this. But thankfully I was in the shape that I was in, and my doctor thinks, like, that proved to him… He goes, 'I know exactly how good of a shape you're in now, because,' he goes, 'I've gotta tell you, man, when you came in, I was really nervous for you. And most people that come in in that condition, they don't leave with a happy ending.'"

After Lynch noted that COVID-19 affects people differently, Erna concurred. "It's pretty random," he said. "I think it has something to do with the blood type and DNA; they're testing for that kind of stuff now. But regardless, I got to the other side of it. I'm doing better than I ever have. It was a very humbling experience and a crazy journey. It puts things in perspective for you. So, that being said, I'm here to just do what we do, man. There was a reason for all of this, and it's made me appreciate life more and my career more and music more and things like that. But I'm also not overjamming my schedule like I used to. I'm taking time for my family, my daughter, the people that I love the most. And I'll play music when I wanna play music now, not because I have to."

Sully also talked about GODSMACK's plans for the next few months, saying: "The first thing to do is these shows. We have six of 'em to do, last night [being] one of 'em and tonight another one. We have four more to do over the next two weekends. And then it's pretty loose until October. Then we start 'touring touring' in Europe, we do South America, we [play] some international [shows]. We'll be back first quarter of '23 with a new record. The record's finished; we're done recording it. You should probably be hearing new music by summertime — mid to late summer — and then following it up with a second single and the full record by the top of '23. That's the plan. And then we're just gonna hit it one more time hard and heavy. And I've gotta tell you, this might be the last one for us — it might be the last record for us."

Erna's personal battle with COVID-19 came less than a year after he said that the coronavirus was not as deadly as health officials have made it out to be. "I'm sorry, man, and there may be some people that may get mad at me about saying this, but COVID is not a global killer," he said during a March 2021 appearance on "The Mistress Carrie Podcast". "It's doing damage, and it's certainly affecting the elderly, and we pray for them, and we are really sympathetic towards that, and that's why we're all wearing masks, that's why we're all doing our job. Because there's a lot of us that aren't afraid of COVID, and we know that we're probably gonna blow right through it. But we don't wanna roll the dice with our loved ones, so we're being responsible. But at the same time, the reality is this isn't a global killer. It's gonna pass, we're gonna get past it, and we need to get back to normal. So we have to influence the strong to get out there and start working and start going to school and doing what they need to do so we can create population immunity. That's what's gonna get us through this. And then we'll be able to get back to normal."

At the time, Erna also repeated a narrative pushed by conservative media and disputed by health experts that suggested the official death count from the coronavirus in the U.S. was inflated.

"There's been a lot of things proven within the media, the news, to who's on what side of what, and whether some of this was a political agenda to begin within, whether the numbers are accurate enough to be able to base it on, those half a million people dead," Erna told "The Mistress Carrie Podcast". "Because there was a lot of people coming forward, a lot of doctors and everything, saying, 'Why the fuck are we being asked to put COVID on everything? Why did someone just die of pneumonia, and we have to write 'COVID'? Why did someone come in and have a heart attack, and we're being told to write 'COVID'?' So whether that half-a-million number is correct, that's the part that I feel like we need to be responsible enough to try and be optimistic about not steering people down one rabbit hole, because that's what CNN does on one side and Fox does on the other side. So CNN delivers one side of this, and Fox takes you down a different rabbit hole."

He continued: "The thing with COVID is I myself know at least — at least — a dozen, two dozen people, maybe, that have gotten COVID. And I have a friend of mine that, three months later, he's, like, 'I'm still having some issues. And it's weird — I'm getting dizzy spells. I'm getting this, that and the other thing. And what the fuck?' And then I know another group of people that were, like, 'Dude, I've had a hangover that was worse than this. I had a fever of 99 for about a day and a half and haven't had a problem since.' And so it affects everybody differently, and that's the big mystery."

Last November, Erna took a swipe at celebrities, including fellow musicians, who have used their high-profile voices to encourage medical behaviors, saying they should "shut up and let people live their lives."

Erna, who confirmed that politics played a part in his decision to relocate GODSMACK's headquarters to Florida — which leans Republican in presidential elections — on a part-time basis while maintaining a home in New Hampshire, has been more vocal about his political opinions in recent years, saying in a July 2020 episode of his Internet show "Hometown Sessions" that if "Trump stays in [office], COVID's gonna be a big, messy pain in the ass, and there's gonna be more people burning down Wendy's fucking restaurants. If Trump fucking is gone, all of a sudden they're gonna have this miracle vaccine that those fucking liars have been holding on to."

In late 2020, at the height of the coronavirus pandemic, Erna hit the road in the U.S. with STAIND's Aaron Lewis as part of the unplugged "The American Drive-In Tour".

Lewis, who has been friends with Erna for more than 25 years, has been a vocal opponent of COVID-19 vaccines, claiming last November that he beat COVID-19 by taking ivermectin, a drug with no evidence of being a safe or effective treatment for the novel coronavirus. He said he also used Z-Pak, an antibiotic used to treat bacterial infections by inhibiting the growth of bacteria in the body.

Backstage at EDBD28 with Sully from Godsmack, could their next album be their last?