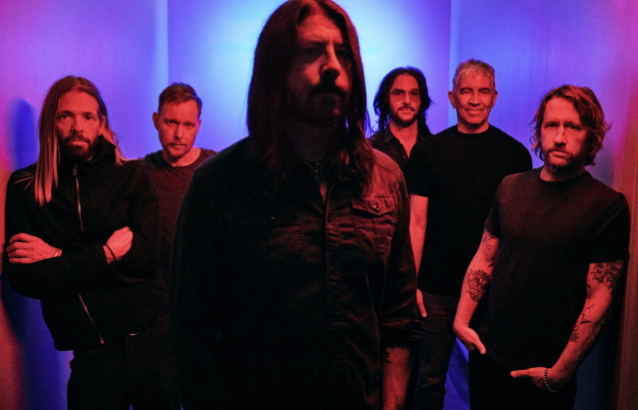 According to TMZ, the surviving members of the FOO FIGHTERS have returned to Los Angeles from Bogota, Colombia following the tragic passing of their drummer, Taylor Hawkins. The tabloid site has shared a few photos of the musicians shortly after their plane touched down, with one picture showing a visibly emotional Dave Grohl hugging a man who looks like his longtime manager John Silva.

In a 2021 interview, Grohl reflected on the first time he met Hawkins. "We were at some radio show backstage, and he came up with a beer in his hand," Grohl recalled. "He's like, 'Hey, man, what's up? I'm Taylor. I play with Alanis Morissette. Dude, I love your record. It's so cool!' He was such a spaz. I was, like, 'Wow, you're either my twin or my spirit animal or my best friend.' In the first 10 seconds of meeting him."

Hawkins died at a hotel in Bogota on Friday (March 25). Local officials said an ambulance was sent to the hotel after a man reported having chest pains. The 50-year-old musician did not respond to resuscitation efforts and was declared dead, the city's health department said.

The band announced Hawkins's death on its Instagram account. "The FOO FIGHTERS family is devastated by the tragic and untimely loss of our beloved Taylor Hawkins," the announcement read. "His musical spirit and infectious laughter will live on with all of us forever. Our hearts go out to his wife, children and family, and we ask that their privacy be treated with the utmost respect in this unimaginably difficult time."

Dave Grohl and his band returned to L.A. from Bogota ... after the sudden death of their drummer and beloved friend, Taylor Hawkins. https://t.co/8uvSwu6h7M