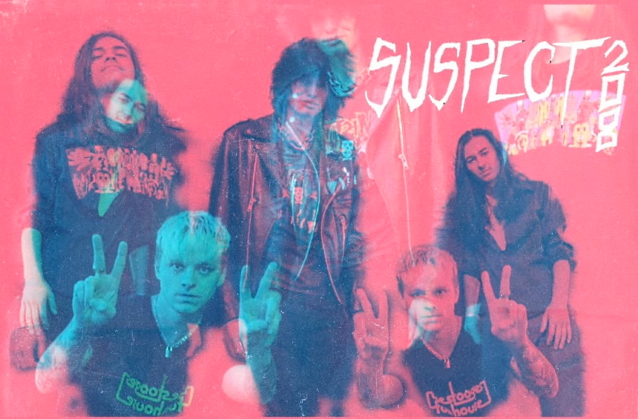 SUSPECT208 Drops 'You Got It' Single

SUSPECT208 has released "You Got It", the second single with its new singer Cody Houston. The track, which can be heard below, arrives three months after the departure of Noah Weiland, the son of late STONE TEMPLE PILOTS vocalist Scott Weiland.

SUSPECT208, which includes drummer London Hudson (son of GUNS N' ROSES guitarist Slash) and bassist Tye Trujillo (son of METALLICA bass player Robert Trujillo),announced Weiland's departure on January 8. At the time, SUSPECT208 confirmed that it had fired Noah, explaining that he "was not writing lyrics or lifting his weight in the band for two months before we let him go. He was heading down a dark path of drug use that got in the way of our friendship as well as the band. Lastly, there were many instances of blow-ups over very small issues we'd confront him with." SUSPECT208's lineup also includes guitarist Niko Tsangaris.

In a recent interview with Australia's Wall Of Sound, Tsangaris stated about finding Cody: "Cody was the first audition that was sent in, and we fell in love with his voice. It wasn't until he then came to L.A. that we realized he is a super hard-working, talented, and awesome person. Musically, we connected on another level, and songs began to flow like water on the first day. We're beyond excited to show our fans what we've been working on."

Cody's first single with SUSPECT208, "Nicotine", came out in January. At the time, Niko said: "We chose 'Nicotine' to be our first single because it's a high-energy, raw, rock 'n' roll song that expresses the energy we have in a room together. We wanted to let people in on what that feels like."

In December, SUSPECT208 released the official music video for its second single, "All Black". A month earlier, the band issued "Long Awaited", which racked up nearly a million views on YouTube before it was removed from the platform. That track had some people comparing SUSPECT208's sound to that of the early 2000s supergroup VELVET REVOLVER, which featured both Slash and Scott Weiland.