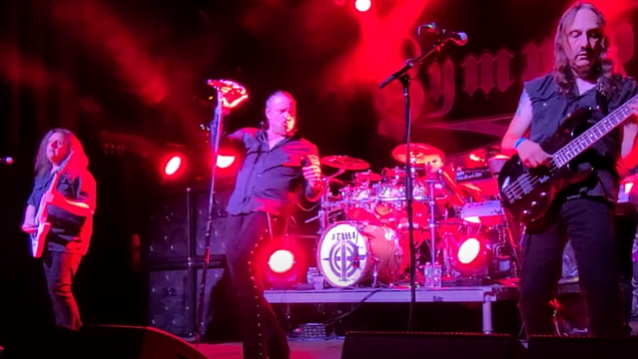 In a new interview with Jeff Gaudiosi of MisplacedStraws.com, SYMPHONY X frontman Russell Allen was asked what it was like for him and his bandmates to return to the road recently after a two-year break due to the global pandemic. He said: "The experience was legendary. I've gotta tell you how impressed I was with the people, with the fans. We were playing in markets that normally we know we do well, and we did well, but we were playing the markets where we never traditionally really drew a lot or sold a lot of merch or anything like that, and it was just stellar, the entire tour. There was people coming out in places like Denver, Colorado; I couldn't believe how many people were there. And it was like that the whole tour; I was just amazed. The L.A. show was, of course, great; the New York show was great; but it was these off markets, I guess these 'B markets,' you could say — in business terms or whatever… To me, a show is a show; I don't care where it is. But I know the bean counters wanna see progress or whatever, and we definitely delivered on that. So to see all those people there was exciting. And they were really hungry for it — of course, we all are hungry for entertainment — and it made the tour that much better. So we had a great time. And then, of course, in South America, we were down there playing in some of the places where we [previously played when were] at our highest points; we were back in those rooms again. It was pretty cool. I can't say enough how happy I am with the tours that we did do, and [I am] looking forward to doing some more with these guys. I think it was a great turnout, and I wanna definitely keep the ball rolling with the band. I think we've touched on something that — we have that legacy-slash-still-relevant thing; it's really strange. SYMPHONY X has always been sort of like that, though."

As for when fans can expect the follow-up to SYMPHONY X's 2015 "Underworld" LP, Russell said: "We're looking at next year to get [the new album] all out there and done. That seems to be the plan right now."

SYMPHONY X's "25th Anniversary North American tour 2022" kicked off on May 10 at Irving Plaza in New York City and made stops in Montreal, Chicago, and Portland before concluding on June 12 in Montclair, New Jersey. Support on the tour came from HAKEN and TROPE.

In July 2017, Russell and his ADRENALINE MOB bandmates were involved in a crash that killed the group's bassist, David Zablidowsky.

In 2019, Allen — who has toured with TRANS-SIBERIAN ORCHESTRA since 2013 — was injured during the rehearsals for TSO's annual winter trek and was unable to make the tour.