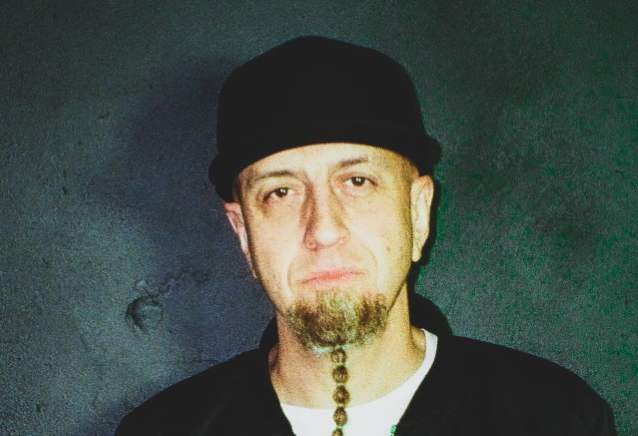 April is Armenian History Month in Los Angeles County, and all month long, KTLA is paying tribute to local Armenians who are making a positive impact in their community. Among them is SYSTEM OF A DOWN bassist Shavo Odadjian, who spoke to KTLA reporter Ellina Abovian about the band, his roots, his Armenian heritage and more. Check out the four-minute segment below.

Two months ago, Shavo was asked in a new interview with KROQ's Kevan Kenney what, in his opinion, made SYSTEM OF A DOWN so musically different from some of its peers. He responded: "There was a lot of things. The music, first of all, we just kind of did our own thing. It wasn't that the other stuff wasn't good.

"We've been inspired by a lot," he continued. "We listen to a lot of music. Daron [Malakian, guitar] listens to a lot of music, [as do] Serj [Tankian, vocals] [and] John [Dolmayan, drums]. And I think it's the way it's also arranged. Daron has a really great ear and style and songwriting ability. So even if I brought riffs in, he just arranges 'em in a different way. And then Serj's vocals — those are not normal. And John's drumming, it is what it is. But, yeah, there's a difference, and we just kind of ran with it. And it's what we can do together. When we start playing, that's what we sound like together — those four guys."

SYSTEM OF A DOWN has toured intermittently since ending its hiatus in 2011, but has only managed to record two songs in the last 16 years, "Protect The Land" and "Genocidal Humanoidz". Released in November 2020, the tracks were motivated by the conflict between Artsakh and Azerbaijan, with all proceeds supporting humanitarian efforts in SYSTEM OF A DOWN's ancestral homeland of Armenia. Along with other donations from fans on their social pages, they have raised over $600,000.

In 2018, Malakian publicly accused Tankian of not wanting to record, with Tankian responding that creative and financial issues with Malakian led to the stalemate. In a message on Facebook, Tankian wrote that Malakian wanted to control SYSTEM's creative process, take more of the publishing money and be the only bandmember to speak to the press.