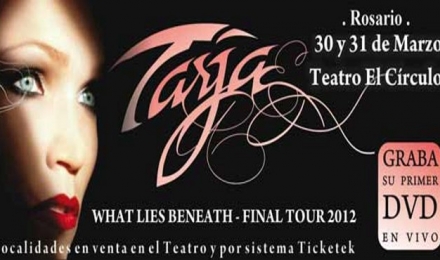 TARJA TURUNEN To Release 'Into The Sun' Single

earMUSIC, the Hamburg, Germany-based rock branch of Edel Group, has set an August 24 release date for "Act I", the new concert CD, DVD and Blu-ray from former NIGHTWISH vocalist Tarja Turunen. The effort was recorded on March 30 and March 31 at Teatro El Círculo in Rosario, Argentina. Each of the two shows featured a different setlist with the exception of five songs, including three tracks from Tarja's time with her previous band ("Nemo", "The Phantom Of The Opera" and "Over The Hills And Far Away").

With the elaborate track listing and its extras, "Act I" provides the full-fledged bill of fare to either Tarja fan. The track listing consists of Tarja's greatest solo tracks, NIGHTWISH classics as well as some cover versions. In addition, "Act I" features two brand new tracks by the Finnish soprano: "Into The Sun" and "Never Enough". "Into The Sun" will be released as a single on August 24.

Says Turunen: "Those two nights in Rosario were a huge emotional drive to me personally." The artist herself admits, she "was many times ready to burst into tears."