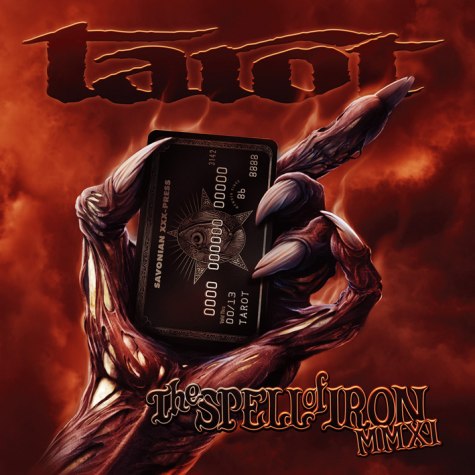 TAROT To Release Re-Recorded Version Of Its Debut Album

TAROT — the Finnish group led by NIGHTWISH/ex-SINERGY bassist Marco Hietala — will release a re-recorded version of its classic 1986 debut album, "The Spell Of Iron", under the title "The Spell Of Iron MMXI" on May 6 via Nuclear Blast Records. The band also filmed a video for the new version of its song "Wings Of Darkness", which was originally made available as TAROT's first single in 1986. Check out the clip below.

TAROT's ninth studio album, "Gravity Of Light", entered the official chart in TAROT's home country at position No. 2. This was the highest-ever chart position for the group in Finland.

"Gravity Of Light" was released outside Finland on April 23, 2010 via Nuclear Blast Records.

Most of the demo work for "Gravity Of Light" was done in August and September 2009 by Marco Hietala, Zachary Hietala and Janne Tolsa, the main writers of the band. The actual recordings for the album started immediately after that in November 2009. Mixing was done by Janne and Mikko Tegelman and the mastering by Mika Jussila at Finnvox studios in January and February 2010.

"Undead Indeed", the latest DVD from TAROT, topped the Music DVD chart in Finland in its first week of release.

The two-DVD and two-CD versions of "Undead Indeed" were made available in Finland on June 11, 2008.

"Undead Indeed" was filmed/recorded on August 17, 2007 at club Rupla in Kuopio, Finland with director Harri Mielonen.