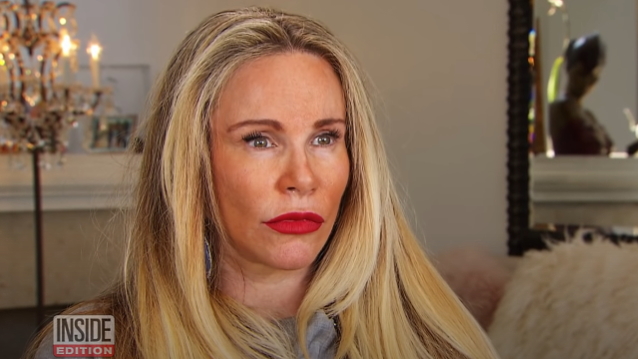 TAWNY KITAEN's Daughter: 'At The End Of The Day, I Don't Have My Mom Anymore'

Tawny Kitaen's daughters spoke to Inside Edition about their mother, who died in May at her home in Newport Beach, California. The actress and model, who is best known in the rock world for her appearance in WHITESNAKE's video for "Here I Go Again", was 59 years old.

Last month, a spokesperson for the Orange County Sheriff's Department in California said that Tawny's cause of death was dilated cardiomyopathy. The manner of death was ruled natural. According to the spokesman, other significant conditions included mild coronary atherosclerosis (clogged arteries); mirtazapine (antidepressant),mirtazapine metabolite, alprazolam (Xanax),acetaminophen (Tylenol),pregabalin (nerve pain medication) and hydrocodone (opioid).

"To be completely honest, when it comes to this type of stuff, all I need to know is my mom is dead," Wynter Finley, 28, said. "I don't really care to look at how or what or what people are saying — to me, at the end of the day, I don't have my mom anymore."

Kitaen's daughters told Inside Edition that their mom suffered from depression when they were kids.

Earlier this month, Wynter told Fox News that she "had a big sense of relief" to know her mother's death was "natural. But regardless of the outcome, at the end of the day, I don't have a mom anymore," she said. "And that's all I care about. But in a way, I am relieved that it was natural."

"All Wynter and I care about is that she went peacefully," Raine, 23, added. "When we got to the scene, the first responders told us, 'There's no foul play.' She died peacefully in her bed. There was no struggle."

Wynter told Fox News that she saw some of the symptoms of her mother's heart failure prior to Tawny's passing. "She was already experiencing it," Wynter said. "You go through stages of getting a bloated stomach, feeling really lethargic and tired, having a cough. And she started showing those symptoms. But we didn't think anything of it.

"What I read about heart failure is, when you go through emotional distress, or stress of that kind, it could take it from one level to the next," she added. "After our [grandfather] passed away [in April after a long battle with skin cancer),I think she was just so heartbroken that it just sped up everything and it ultimately caused her heart to completely fail. Because she was very sad."

While WHITESNAKE was working on it 1987 self-titled album, singer David Coverdale started dating Kitaen, who had recently starred opposite Tom Hanks in the movie "Bachelor Party". Kitaen soon appeared in several of WHITESNAKE's music videos, including those for "Here I Go Again", "Is This Love" and "Still Of The Night". Footage of Kitaen writhing around on the hood of a Jaguar in the "Here I Go Again" clip has been called one of the most iconic — and sexiest — video moments ever filmed.

Coverdale discussed Kitaen's passing in a recent interview with Meltdown of Detroit's radio station WRIF. He said: "I got a text late at night, and I thought, 'Oh my God.' Really, to be honest, there had been no communication for over 30 years. I've been deeply invested, and continue to be invested, in my marriage to [my current wife] Cindy. I think it would have been different had Tawny and I had a child, but we didn't. And I sent my condolences out to her family and friends and made a modest public statement because it really wasn't my place to do anything else.

"As you know, Tawny is synonymous with WHITESNAKE, with MTV," he continued. "This iconic, amazing beauty who brought so much attention to my music. Once you go, 'Oh my God, she's gorgeous,' you go, 'Wow, the songs aren't bad either.'

"Yeah, so that was a shock — there was no question," David added. "I didn't see that one coming. But then, sadly, I'm losing a lot of people. At this age, it's so weird the amount of people I know who are checking out, privately or professionally. It's pretty crazy. But it's onwards and forwards — it has to be my philosophy."