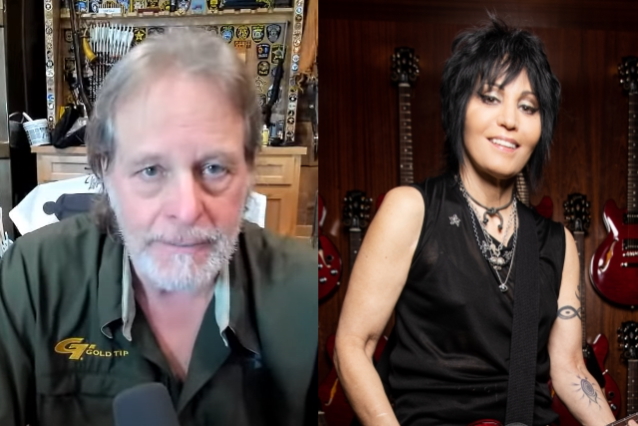 Ted Nugent has blasted Rolling Stone magazine for including Joan Jett on its list of "100 Greatest Guitarists".

The 73-year-old rocker, whose recent time in the spotlight has been more for his political views than his music, railed against Jett's inclusion on the list while praising such great musicians as Angus Young (AC/DC),Eddie Van Halen (VAN HALEN),Billy Gibbons (ZZ TOP),Neal Schon (JOURNEY),Joe Bonamassa, Derek St. Holmes, Tommy Shaw (STYX) and Rickey Medlocke (LYNYRD SKYNYRD) during his December 30 YouTube livestream.

He said (as transcribed by BLABBERMOUTH.NET): "So I just mentioned some killer, monster guitar players, huh? Some of the best that ever lived. But when you see the Rolling Stone magazine list of greatest guitar players, they list Joan Jett but not Tommy Shaw.

"How do you list the top 100 guitar players and not list Derek St. Holmes?" he continued. "How do you do that? You do that by lying. The same way you get Grandmaster Flash in the Rock And Roll Hall Of Fame. You do that by lying. You have to be a liar. You have to have shit for brains and you have to be a soulless, soulless prick to put Joan Jett… [I] love Joan. Some of my greatest memories include lesbians. I love the lesbians; it's a cocktail of wonderment. [I] love Joan Jett — 'put another dime in the jukebox, baby'; great rock and roller — but as a top 100 guitar player, but you don't list Rickey Medlocke or Dave Amato [REO SPEEDWAGON]. Really? Or Dick Wagner? Dick Wagner and THE FROST from Detroit. Or Mark Farner? Mark Farner from GRAND FUNK RAILROAD. Joan Jett is on the list but not Mark Farner? Grandmaster Flash is in the Rock And Roll Hall Of Fame but not GRAND FUNK RAILROAD? [Laughs]

"By the way, if Grandmaster Flash is in the Rock And Roll Hall Of Fame and Joan Jett is on the list of top 100 guitar players, then I'm Caitlyn Jenner's boy toy."

This is not the first time Nugent has been critical of Rolling Stone editor David Fricke's choices for "100 Greatest Guitarists". Three years ago, he said that he hasn't gotten the recognition that he deserves as a guitar player, explaining: "This isn't ego. I have an ego, because I have self-esteem, because I put my heart and soul into being the best that I can be. If you run a race and your chest breaks the ribbon and you've won the race, I think you can look in the camera and go, 'Man, I'm fast. Man, I ran good.' I think that should be celebrated. Excellence should always be celebrated. But remember, those people in the musical [sic] industry who make those decisions about who's best and who is in the Rock And Roll Hall Of Fame, they hate me because I'm against dope. And I am against dope. I don't think it's good. I don't want my sons and daughters, I don't want my grandkids, I don't want my pilots, I don't want my band, I don't want my crew stoned. I don't want them comfortably numb. I don't wanna have to wake 'em up three times to get to the gig. I don't wanna have to remind 'em how the song goes. I've had this all my life. And these people in charge of deciding this, they don't like me because I'm on the board of directors with the highest votes for 25 years on the National Rifle Association. They somehow blame inanimate tools on crime."