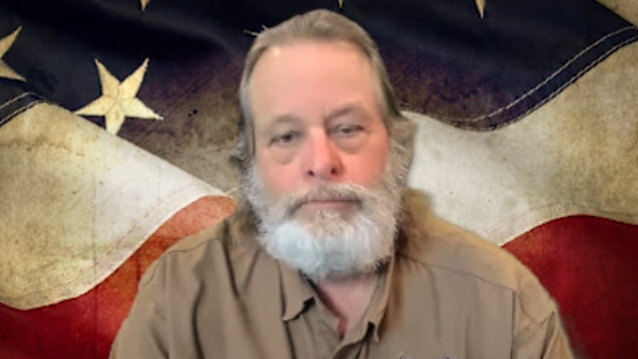 Ted Nugent has defended Florida's controversial new "Don't Say Gay" law, saying that it is about giving parents "the right to guide and nurture and educate their children."

The law, titled "Parental Rights In Education", has been dubbed by critics the "Don't Say Gay" law because it seeks to ban discussion of gender and sexuality issues with younger students. Proponents of the law point out that it doesn't mention the word "gay" although it does, however, contain the terms "sexual orientation" and "gender identity," each twice. The most notable part of the law provides that "classroom instruction by school personnel or third parties on sexual orientation or gender identity may not occur in kindergarten through grade 3 or in a manner that is not age appropriate or developmentally appropriate for students in accordance with state standards." The law, however, does not define key terms like "age appropriate" or "developmentally appropriate." It doesn't even define the term "classroom instruction."

Nugent weighed in on the legislation, which was officially signed into law by Florida's Republican governor Ron DeSantis, during yesterday's (Wednesday, April 6) edition of "The Nightly Nuge", a news-style clip in which Ted offers his take on the news of our world every night. The 73-year-old musician said (as transcribed by BLABBERMOUTH.NET): "[My wife] Shemane and I work very closely with some real commandos, some ex-special forces guys that are tracking down child sex traffickers. And there's a term in that world of child sex trafficking and pedophilia known as 'grooming.' And you wanna start at a very early age to impact the undeveloped, mushy minds of youth to accept evil. And it goes right back to this whole gender control by our government, media, academia, Big Tech. These people are pure evil, and they are grooming young people to accept the most evil of controls, and that is to sway them into total slavery of power abusers like the government, like academia, to control their minds. And I don't know what the endgame is, but it's about control, and it's about, if nothing else, mental and spiritual slavery of young people. That they're not teaching reading, writing and arithmetic or history, and that they're graduating people with high school diplomas in Philadelphia that cannot read. You can open the page of a book, you can lay a newspaper in front of them, and they can't read but have a high school diploma.

"Our corrupt, evil, tyrannical powers that be in government, media, Big Tech, academia and Hollywood are grooming the youngest of Americans to control them in the most evil of ways, because this is the foundation of child sex trafficking, when you can destroy their identity and destroy their north spiritual compass," he continued.

"So, when we're talking about allowing children to choose their gender… In New Jersey, I understand that parents in some jurisdictions aren't allowed to put the gender of their child upon birth because they have to wait till the child decides later on, even though it's clearly a boy or a girl. And now parents are fighting back because as the media and government lies through their teeth — every hour of every day — claiming that the bill in Florida is 'Can't Say Gay' [sic] bill. The word 'gay' doesn't exist. The bill is about giving parents the parental right, the most instinctual, clear and present parental right to guide and nurture and educate their children and avoid strangers to indoctrinate them as early as kindergarten. And they call it 'Can't Say Gay' bill. Nobody ever said anybody can't say gay. It's about parental rights.

"So these are indicators that the media and this man Joe Biden are absolute serial liars with a very dangerous and evil agenda to twist the minds of the most precious amongst us — our own children," Nugent added. "So Shemane and I stand up, and more and more parents are standing up. And we did a rally in Florida recently where parents are now running for school boards and they're finding out the horrific agenda of this transgender, homosexuality. And if you wanna transgender, that's… a shame. If you're a homosexual, we support… your choice. But don't you dare try to indoctrinate these innocent young children. And that's their agenda."

A recent ABC News/Ipsos poll found that more than 6 in 10 Americans oppose legislation that would prohibit classroom lessons about sexual orientation or gender identity in elementary school.

At least two of Nugent's fellow rock musicians recently publicly criticized the "Don't Say Gay" law. Last month, DISTURBED singer David Draiman, who announced plans to relocate to Miami from Honolulu, took to his Twitter to share a Miami Herald article about protests that have erupted in Florida after the passage of the controversial bill in the state legislature, and he included the following message: " This is fucking ridiculous. #GAYGAYGAYGAYGAYGAYGAY".

"I have an 8 year old son who has classmates whose relatives are LGBTQ+. We have many friends that are LGBTQ+.

"Kids are going to ask questions about the world around them and they deserve honest, real answers."

The same day, AVENGED SEVENFOLD frontman M. Shadows weighed in on Draiman's initial tweet, writing: "As a parent of a 7 and 9 year old they have asked about sex and used the word 'gay' in derogatory fashion. Kids are aware at this age so I feel the quicker we explain and show empathy for all people the better… including in school. (I read the full bill.)"