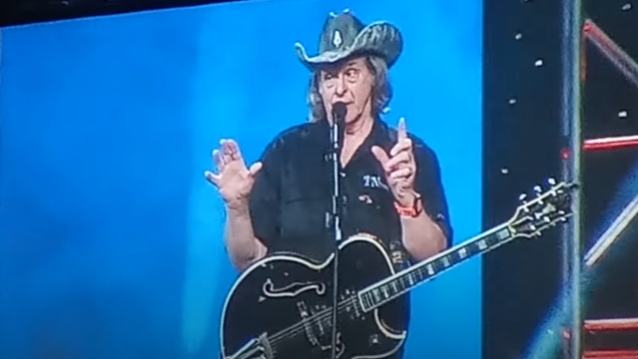 Ted Nugenthas called on supporters of former U.S. president Donald Trump to go "berserk on the skulls of Democrats" and other "enemies" of America.

While performing at Trump's "American Freedom Tour" stop in Austin, Texas on Saturday (May 14),the 73-year-old rocker, who regularly promotes conspiracy theories about everything from the COVID-19 pandemic to the U.S. Capitol riot, told the roughly 8,000 people in attendance, all of whom were required to purchase tickets to hear the former president speak at the Austin Convention Center: "Think of what the enemies of America have done over the last 14 months. They didn't sneak into the White House — they lied, they cheated, they scammed, and every day the Democrats violate their sacred oath to the Constitution. And if you can't impress your friends on that, they shouldn't be your friends.

"So I love you people madly," Nugent continued, "but I'd love you more if you went forward and just went berserk on the skulls of the Democrats and the Marxists and the Communists."

Just last month, Nugent, who is an avid Trump supporter, was asked during an appearance on QFM96's "Torg & Elliott" radio show if he thinks the billionaire real estate mogul will run again in 2024. He responded: "Yes. And I've gotta tell you. So, do we not want secure borders? Secure borders are not good? Stopping the flow of fentanyl is not a good idea? Stopping invaders from Syria and Somalia and jihadists coming across our southern borders, that's not a good idea? Making the members of NATO and the Paris Accord pay their own way, that's not a good idea? The lowest unemployment in the history of America, that's a bad idea?

"I've gotta tell ya, anybody that is against Trump is literally against quality of life in the United States Of America. Whether you like the guy or not, that has nothing to do with it.

"He saved your child from the whitewater rapids; quit complaining about his speedo."

Nugent previously spoke about his admiration for America's 45th president in an October 2020 interview with InfoWars' "The Alex Jones Show", hosted by noted conspiracy theorist Alex Jones. At the time, he said: "I genuflect at the altar of this great man. He is just pulling off miracle after miracle. He's really touching the heart and soul and representing the heart and soul of the best American families out there. Just praise God for that. This is one of those divine intervention moments, like the founding fathers. Believe me when I tell you that.

Ted Nugent at the Trump rally yesterday: “Think of what the enemies of America have done over the last 14 months .. I love you people madly, but I’d love you more if you went forward and just went berserk on the skulls of the Democrats and the marxists and the communists.” pic.twitter.com/8r1RVvpxon