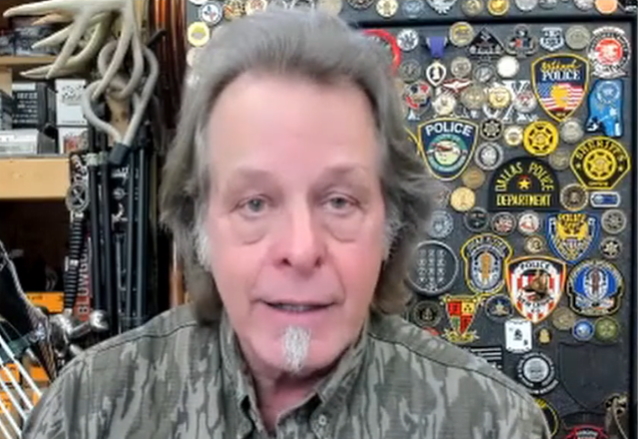 TED NUGENT: 'I Was Born With The God-Given Right To Keep And Bear Arms 24-7'

Ted Nugent has once again defended his right to bear arms under the Second Amendment, arguing that he got it from "God." The musician discussed his natural-born rights as an American while talking to John McLaughlin of the Iowa Firearms Coalition.

The 73-year-old conservative rocker, who recently resigned from the board of the National Rifle Association (NRA) after 26 years, said in part (as transcribed by BLABBERMOUTH.NET): "I don't need any man — in fact, no man exists to authorize or offer me a permit or a license for my right to keep and bear arms. My name is Ted Nugent. I was born with the God-given individual right, as guaranteed by the Second Amendment, to keep and bear arms 24-7, 365, 74 years on American soil. And I take it a step further because I don't think the Constitution and Bill Of Rights limits me to American rights… I believe as a human being, a free man created in the image and likeness of God…

"See, that's where we've become. Some people go, 'Well, they need to declare that you have a constitutional right.' Are you kidding me? So I need some man to go, 'By the way, Ted, I give you the constitutional…' You don't give me jack squat. I had that when I was born.

"God created you as a free man, as guaranteed by the outlined self-evident truth in the Constitution," Ted added. "Currently Americans are being infringed by the abuse of power that we let them have all these years."

This past June, Ted made headlines when he said that there is a "proven" way to stop mass shootings at schools. He said: "Secure the damn schools. And this isn't a guitar player's hunch — it's been proven. One point of entrance, all other entries locked. Have a real commando — I mean, a real tuned-in guy that's trained in tactics and firepower and criminality, and have him looking for trouble. Not kind of casually walking around Parkland and maybe he'll run into trouble — have a commando that values those children's lives and have this commando, well-trained tactical capable individual looking for trouble and stopping it before it gets there."

Ted made his comments in the wake of a mass shooting in a Uvalde, Texas elementary school in May which resulted in the deaths of at least 19 children and two adults.

The Uvalde massacre came only 10 days after an 18-year-old gunman in body armor killed 10 shoppers and workers at a supermarket in a predominantly black area of Buffalo, New York.

In March 2021, Nugent threatened President Joe Biden and other Democrats, telling them to "come and take it" just hours before the House of Representatives passed two gun-safety bills.

In a March 11, 2021 Facebook post, Nugent addressed Biden and "all you other oath violating traitors," writing, "Google my address and itinerary and Come and Take It!" He also proclaimed, "If you want to play Concord Bridge again, you will be the British and I will be the Americans, again."

In August 2021, Nugent told Fox Nation's "Tucker Carlson Today" that the purpose of the Second Amendment is to protect the nation from tyranny.

In a July 29, 2021 e-mail from NRA general counsel John Frazer sent to board members, it was announced that Nugent, who joined the board in 1995, was stepping down "due to ongoing schedule conflicts."

Ted's decision to leave the board came less than a year after he told Newsmax's "The Chris Salcedo Show" that the National Rifle Association was "the most important civil rights organization in the world."