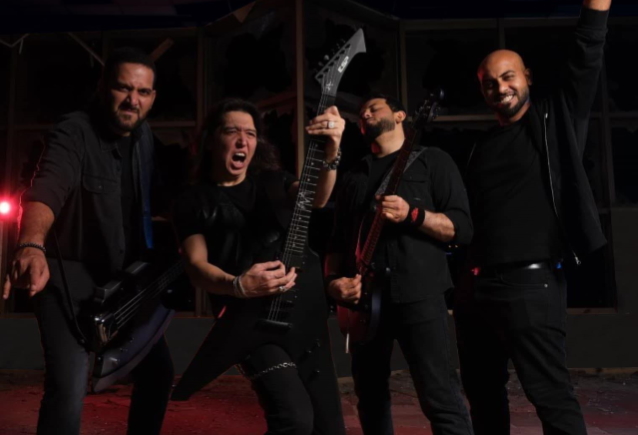 IMMORTAL PAIN, which sings original songs in English, performed on the second day of the multi-genre pop-culture convention at the Jeddah International Exhibition And Convention Center in Jeddah.

IMMORTAL PAIN rhythm guitarist and vocalist Emad Ashoor told Arab News about the Saudi metal scene: "The heavy metal scene is huge. It's kind of an underground scene, but we have a lot of great bands around such as WASTED LAND, KAIZER, and it's still growing."

IMMORTAL PAIN drummer Moayad Al-Shammari added: "It's been quiet for a while, but now practicing music is supported by the country. IMMORTAL PAIN are actually one of the pioneers in the metal scene in Saudi Arabia, and I'm so thankful to see the growing number of bands.

He added: "It feels so welcoming. People cannot believe that we posted on social media that we are playing at Comic Con Arabia; they said it's like a dream come true."

Back in October 2019, Saudi Arabia's grindcore band CREATIVE WASTE played what is believed to have been the first public metal concert in the kingdom's history. At the time, CREATIVE WASTE frontman Fawaz Al Shawaf told Metal Injection: "Leading up to the show, people, especially bands, were skeptical for the longest time, because they existed in the old generation. A lot of them were being conservative. They were worried. No one's ready to take the risk. But, I mean, the ones who organized the show are actually basically newcomers and young. They didn't even know what grindcore or death metal was. So they weren't into extreme music, but they asked us, and I thought the idea was so crazy that I accepted it because it's a part of the change."

Earlier this year, Saudi metal artist Meshari Sangora, who goes by the name "Dusk", told Mille about the metal scene in the kingdom: "Yes, there was and still is a metal scene all over the kingdom — from bands that were formed in the late '90s to the early 2000s and even up to today. Recently, places like Syrup in Riyadh and The Music Space in Jeddah have given the opportunity for indie musicians, including metal artists like myself, to express themselves. With all the changes that are happening and the continuous engagement on social media, more people are getting exposed to the genre. Which makes me see a great future for the metal scene and metal music in the Middle East and Saudi Arabia."

Comic-Con Arabia got underway on Thursday. The event, which was described as "a must for all fans of comic books, superheroes and anime," follows the staging of Super-Con and K-Con in Saudi Arabia earlier in the year.

This coming Friday (October 21) we will be taking over the Comic Con Arabia main stage to bring Metal to the forefront...