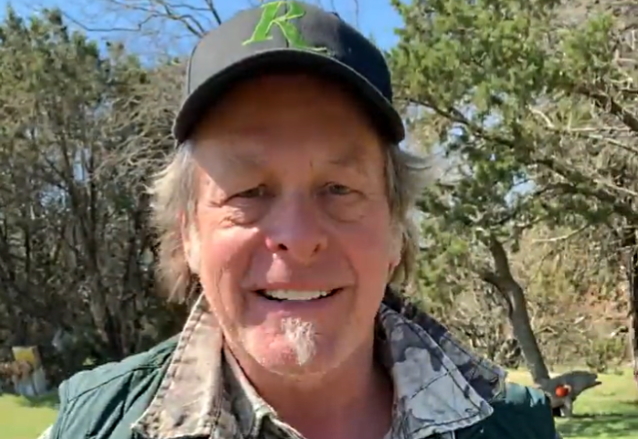 TED NUGENT Once Again Denies Accusations Of Racism: 'I Am Color Blind'

Ted Nugent has once again fired back at accusations of racism, saying that no one has promoted black artists as much as he has his entire life.

The outspoken conservative rocker made his comments more than three months after he revealed he lost a major sponsor of his award-winning "Spirit Of The Wild" television show over allegations of racism.

During an appearance on the "A Bone To Pick" podcast, Ted said in part (as transcribed by BLABBERMOUTH.NET): "I'll tell you something outrageous: all people combined have not promoted black artists as much as Ted Nugent has my whole life. My bass player [in the 1990s] was Johnny Gunnell [a.k.a. Jon E. Gee]. He's a black dude. My bass player after Johnny was Marco Mendoza. He was born in Mexico.

"I am on record thousands of times — color doesn't matter," he continued. "Punctuality, work ethic, talent, dedication. If you wanna be a bass player in Ted Nugent's band, you just have to be the best bass player in the world. I am color blind.

"I've gotta tell you: when I was born in 1948, was there racism? Sure. Jim Crow was still going on. I went to Detroit parks, and it didn't register at the time because there was no racism in my home; it was about dedication and content of character. We had black friends in Detroit, black people all the time and I never gave 'em a second thought. They were black. I'm white. This guy looks like he's Asian. Who cares? Have you ever met anybody that cares? I don't care.

"So that is the cheapest, the most dishonest and the most meaningless accusation that has ever existed in this day and age — is one of racism," Ted added. "Because if you really examine those who call us racists, look closely — those are the racists. They always reference color."