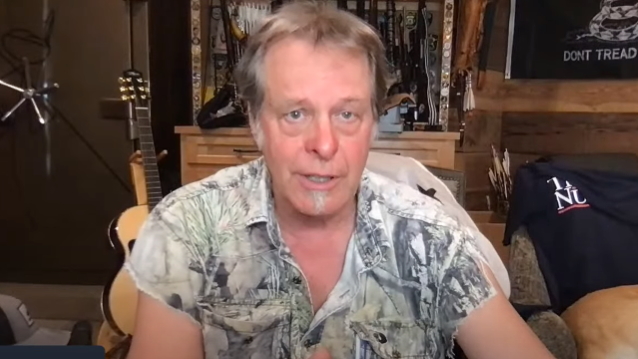 Ted Nugent has once again repeated the baseless conspiracy theory that the riot at the U.S. Capitol was orchestrated by Antifa and Black Lives Matter.

Nugent discussed the Capitol riot fallout during a June 7 YouTube livestream. The outspoken conservative rocker said (as transcribed by BLABBERMOUTH.NET): "We know that the January 6th event at the Capitol in Washington, D.C., those weren't Trump supporters destroying stuff and breaking windows and being vandals. Those were Antifa and Black Lives Matter wearing Trump shirts and hats. I wanna be on record right now for that. Insurrection my ass.

"So let me make it clear: January 6th wasn't an insurrection. Those were terrorists, like Black Lives Matter and Antifa dressed in Donald Trump shirts doing all the damage. The real Trump supporters were conservatives that believe in God, family, country, law and order trying to stop them. And I would ask… So why were the cops waving them in? And here's the question America demands an answer to: who was the cop that shot the Navy vet? Was it Navy or Air Force? It doesn't matter, 'cause warriors of the military are all heroes and warriors anyhow. I wanna know the cop's name that shot the lady, and I wanna know what's gonna happen to him."

Nugent previously made similar claims during the January 11 episode of his Internet show "Spirit Campfire". At the time, the outspoken conservative rocker said about the events of January 6: "I think everybody knows that every possible deception was applied to the recent election, and Donald Trump wanted Americans who believe that, witnessed that and know that to make a peaceful protest out of the First Amendment. And I am convinced equally to those statements I just made that Antifa and Black Lives Matter terrorists infiltrated that peaceful protest, and they are the ones who initiated the violence.

According to The Washington Post, FBI director Christopher A. Wray testified repeatedly to the Senate Judiciary Committee that there was no evidence that Antifa, anarchists or provocateurs who didn't support Trump were involved in the Capitol siege.

Ted has called Donald Trump "the greatest president in our lifetime," and has said that the billionaire real estate mogul represents "the heart and soul of the best American families out there."