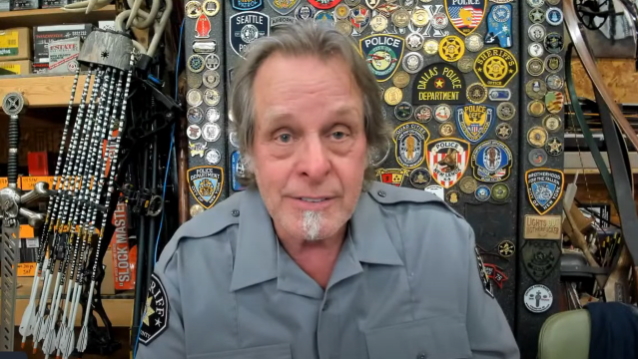 Ted Nugent has repeated the false narrative that that January 6, 2021 rioters were welcomed into the Capitol by police officers.

According to CNN, former U.S. president Donald Trump said in a book interview in March that "the Capitol Police were ushering people in" and "the Capitol Police were very friendly. You know, they were hugging and kissing." The claim has been echoed by Trump supporters, including Trump-endorsed Republican Arizona gubernatorial candidate Kari Lake, who declared at a Trump rally in October that the people being held in jail over the Capitol attack "were invited in by Capitol Police."

Earlier today, Nugent repeated the false claim during his YouTube livestream, saying that the "FBI instigated the January 6th vandalism. That was the FBI that did that. The Trump supporters didn't do anything wrong," he claimed. "They were ushered into the Capitol by the Capitol Police. When you're ushered in by law enforcement, you're not trespassing. Do you think if I welcomed people onto my property and then I called the judge and said, 'Hey, judge, they're trespassing.' 'Well, I've got video of you welcoming them on your property. So that wouldn't be trespassing; you actually welcomed them on your property. So eat shit, Nugent. That's not trespassing.'" He added: "Hey, FBI. Hey, Capitol Police. Hey, judges. Hey, Obama-appointed judges, that's not trespassing. Law enforcement welcomed them into the Capitol."

According to the United States Department Of Justice, approximately 140 police officers were assaulted January 6, 2021 at the Capitol including about 80 U.S. Capitol Police and about 60 from the Metropolitan Police Department. More than 840 suspects have been arrested in connection with the attack.

Nugent also went on to praise a California doctor known for spreading debunked claims about COVID-19 who was sentenced on Thursday to 60 days in prison for illegally entering and remaining in the U.S. Capitol during the January 6 insurrection. Dr. Simone Gold, founder of the group America's Frontline Doctors, which treated Nugent when he contracted COVID-19 in April 2021, was also ordered to pay a $9,500 fine.

"The great courageous hero Dr. Simone Gold was charged with crimes that she's gonna have jail time," Ted said. "Dr. Simone Gold, who recommended ivermectin and hydroxychloroquine that cured people, that saved people from the weaponized Wuhan virus, that saved them from the emergency experimental shot that our own government said it's not a vaccine but let's call it a vaccine, because people are comfortable with that. You remember when the government said, 'People are comfortable with something. Let's lie to 'em.' 'Get on the train. You're going to a shower.' 'Well, they're comfortable with showers, so we'll tell 'em they're getting on the train to go to the showers. They're comfortable with that.' 'They're comfortable with the word 'vaccine' so let's tell 'em it's a vaccine even though it's an emergency experimental shot that doesn't have any research and is killing people and destroying people's lives.' But I'm gonna get off Facebook because I'm violating their community standards. So let's say I'm a Jew in Nuremberg in 1938 and I wanna have a bar mitzvah. I'd probably be violating the community standards of Hitler."

This is not the first time Nugent has spread misinformation about the Capitol Riot. Back in January, he once again repeated the baseless conspiracy theory that the riot at the U.S. Capitol was orchestrated by undercover FBI agents, Antifa and Black Lives Matter.

Nugent discussed the Capitol riot fallout during a January 6, 2022 YouTube livestream marking the first anniversary of the tragic event. The outspoken conservative rocker said: "I think January 6th, 2021 was a gift from God to further emphasize and prove just how rotten to the core, terminally dishonest, treasonously criminal the Democrat party is, especially this devilpunk who thinks he's the commander in chief. Are you listening and watching this monster of an America-hating, freedom-hating prick? Are you watching and listening to this guy? 'Well, that's awfully harsh, Ted.' Yes, it is extremely harsh because there are no gentle or civil terms to use to describe Joe Biden or Kamala Harris or, quite honestly, anybody in government right now.