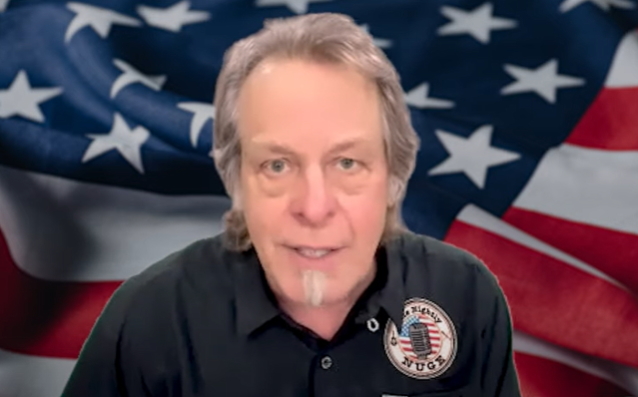 Ted Nugent has blasted The Walt Disney Company for releasing an animated series called "Little Demon". The late-night series, which Disney made available through its FXX network, features the voice of Danny DeVito as Satan, and Lucy DeVito as his teenage daughter, Chrissy. The program, which was made for and marketed to adults, also features Aubrey Plaza as Chrissy's mother, who strives for her daughter to live an everyday life although she's the Antichrist.

In recent days, "Little Demon" has drawn scathing criticism from a U.S. congressman who has warned families to protect their children from it. In a Facebook post made last week, Republican Louisiana congressional representative Mike Johnson decried The Walt Disney Company because FXX aired a commercial for "Little Demon" during the second quarter of a Louisiana State University football game. Johnson wrote: "I couldn't get to the remote fast enough to shield my 11-year-old from the preview, and I wonder how many other children were exposed to it—and how many millions more will tune in to the new series, owned and marketed by DISNEY."

Nugent weighed in on the controversy during a new episode of "The Nightly Nuge", a news-style clip in which Ted offers his take on the news of our world every night. The 73-year-old conservative rocker said in part (as transcribed by BLABBERMOUTH.NET): "This culture war has now morphed into a spiritual war. Clearly, what Donald Trump, his reference to the Bible, his reference to God, family, country… Joe Biden will never do that; when he does, it's usually in a snide, condemning way. So now that Disney, which I was raised by Disney. Every Sunday night, the family got together with real butter on the popcorn and we'd watch Walt Disney and see these fun little cartoons… And now with Disney producing a celebration of Satan — Disney celebrating the gender confusion and gender dysphoria and gender mutilation and thinking that somehow binary and non-gender and grooming children and promoting organizations like NAMBLA, the North American Man Boy Love cult, and teachers in our schools changing the word 'pedophile' to 'minor attracted'— I mean, this is pure demonacy. [Editor's note: Nugent is apparently referring to a Virginia professor who was forced to step down after backlash to research on 'minor-attracted' people] And now Disney is representing the left with a new movie, a new special where they literally celebrate a woman giving birth to the seed of Satan."

He continued: "And you don't have to look any further — look at Joe Biden's recent hate speech. The red lighting — I expected a gargoyle to show up at any moment. It really is a movement.

"So here's the answer. Put your heart and soul into thanking God for his miracle of creation and this precious gift of life. Let everybody you know that we stand up for the American Dream that was based on divine intervention by the hand of God away from kings and tyrants and emperors."

Nugent added: "Disney has gone to the dark side. Never take your children to Disney. That has turned into evil. And Walt is crying tears of blood at the side of the Lord because the Disney organization has become pure rot."

According to Filter Free Parents, while "Little Demon" "may be owned by Disney (thanks to the company’s purchase of FX Networks and Hulu back in 2017),the late-night series is obviously not for children. It has a TV-MA (for Mature Audiences only) rating for graphic violence, nudity, sex, and crude language."

New episodes of "Little Demon", which debuted in August, are broadcast Thursdays on FXX at 10 p.m., when "kids should be asleep," according to some people who have defended the program.

Nugent is an avid supporter of Donald Trump, who was white Christians' preferred candidate for the 2020 presidential election despite the fact that Trump is twice divorced and has faced over two dozen accusations of sexual misconduct. Some Trump supporters have even insisted that the former president is a Christian hero who is standing up for religious rights.

Nugent previously spoke about his admiration for America's 45th president in an October 2020 interview with InfoWars' "The Alex Jones Show", hosted by noted conspiracy theorist Alex Jones. At the time, he said: "I genuflect at the altar of this great man. He is just pulling off miracle after miracle. He's really touching the heart and soul and representing the heart and soul of the best American families out there. Just praise God for that. This is one of those divine intervention moments, like the founding fathers. Believe me when I tell you that."

In 2019, Nugent defended Trump after the then-U.S. president was accused of making racist remarks about Democratic congresswomen from black and minority ethnic backgrounds.