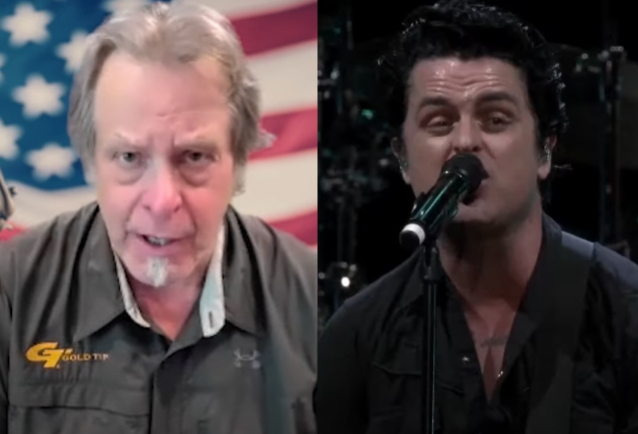 Ted Nugent says that the U.S. Supreme Court "did a good job" by ruling Friday (June 24) that Americans no longer have a constitutional right to abortion.

Nugent addressed the Supreme Court's ruling during the latest edition of "The Nightly Nuge", a news-style clip in which the outspoken conservative rocker offers his take on the news of our world. He said in part (as transcribed by BLABBERMOUTH.NET): "When the left keeps saying that, 'We lost our constitutional right to an abortion,' share that phrase in the Constitution with me where it gives you the right to kill the unborn… My point being, it isn't mentioned in the Constitution, so I'm gonna repeat once again, 'Any rights herein not enumerated are left up to the States.'

"Clearly, the abortion issue, like any other issue, idea or hunch that is not enumerated in the Constitution or the Bill Of Rights clearly is up to the states," he continued. "Even a guitar player doesn't need any translator for that one. So once again, it is the hysteria…

"And I've gotta tell ya, the word 'cruelty' from the left… I've witnessed some artists out there, like Billie Armstrong of GREEN DAY — he's incredibly talented, but he's just lost his soul — and Pink, an incredibly talented, work-ethic artist, who just scream and just attack people who choose not to have an abortion.

"By the way, as you and I speak right now, if anybody wants an abortion in America, guess what — they can get one," Nugent added. "It's not the banning of abortions; it's bringing it back to constitutionality and common sense.

"And again, there are medical concerns… Can you imagine, trying to make the decision where you have a choice to save the mother or the baby? Well, that is a spiritual moment between you and God and your health professional and the husband and the wife or at least the mother and the father.

"So, I am, and my family believes in, abortion should be legal, it should be safe and it should be rare," Ted said. "But don't send me the bill because I don't subscribe to murdering this innocent baby who the science has proven that it feels the pain when you kill it in the womb.

"This issue is just volatile. So the Supreme Court did a good job."

Despite Nugent's claim to the contrary, scientific research does not prove a 20-week-old fetus can feel pain.

According to FactCheck.org, scientific research on pain in the fetus is extremely complicated, primarily because pain is a subjective experience and a fetus cannot indicate if something hurts.

During a performance as part of the band's "Hella Mega" tour at the London Stadium, Armstrong expressed his frustration as he told the crowd: "Fuck America. I'm fucking renouncing my citizenship. I'm fucking coming here."

He went on to say there's "too much fucking stupid in the world to go back to that miserable fucking excuse for a country," before urging fans to be prepared, saying: "You're going to get a lot more of me in the coming days."