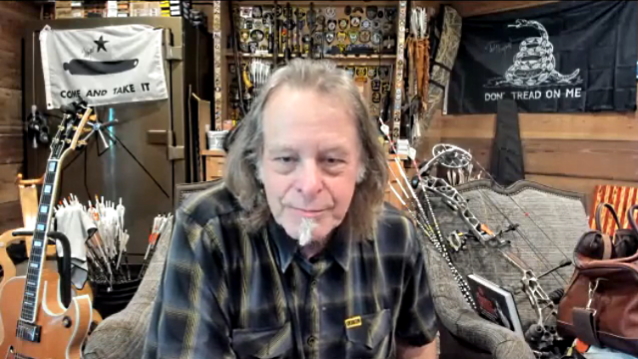 In a new interview with HMP, legendary rocker Ted Nugent was asked what he thought of MOTÖRHEAD's cover version of his classic song "Cat Scratch Fever". He responded (as transcribed by BLABBERMOUTH.NET): "I'm an honest guy. Number one, [I] love Lemmy, love MOTÖRHEAD. And I'm humbled and honored that they would pick one of my songs — that's a great connection that we have. But that's not how I hear it. [Laughs] The 'Cat Scratch Fever' lick — no one's ever played it correctly… They played it real Caucasian, and if that's what they like, God bless 'em. And the people that liked it, I love all of you. But when I hear 'Cat Scratch Fever', I hear more of a Motown grunt. And like when the RAMONES played 'Journey To The Center Of The Mind', my AMBOY DUKES hit song, it's just too Caucasian… And I think PANTERA did 'Cat Scratch Fever' too. And again, I love them. Thank you for playing it. Thank you for honoring me by choosing one of my songs. But it doesn't have the groove that I like, it doesn't have the pulse and the Motown soulfulness that I created in the song. But again, I love them for doing it, and if they enjoyed it, I love them for enjoying it. But it's not my cup of tea."

Nugent's latest comments echo those he made in April when he was asked in an interview with Meltdown of Detroit's WRIF radio station to name the best cover version he has ever heard of one of his songs. He responded: "Unfortunately, I never have. I've heard the versions of 'Cat Scratch Fever', and I love PANTERA and I love Lemmy and I love the RAMONES, but God, are they terminally Caucasian or what?

"There's a real Motown soulfulness to what me and my boys deliver; there's a grunt and a grind," he continued. "And I love musicians who put their heart and soul into stuff — I love METALLICA and I love SLAYER and I love MEGADETH and I love 'em all. But when I listen to music, I wanna hear a groove; I wanna hear some grunt. I wanna hear the bass and drums of Motown like [my bassist] Greg [Smith] and [drummer] Jason [Hartless] create, what Johnny Badanjek and Earl Elliott created, like what Cliff Davies and Rob Grange created, what Jack Blades and Michael Cartellone created, what Carmine Appice and Tim Bogert… You know what I mean? I like a sexy, grunting rhythm. And I hear it from METALLICA sometimes, and I love their heavy metal stuff — it's killer. They're unbelievable musicians and [they have] an incredible work ethic; they're all in the asset column of life and music. But when I heard Lemmy's version of 'Cat Scratch Fever', I thanked him, and I do appreciate it. And when I heard PANTERA's version of 'Cat Scratch Fever', I thanked them, but I think they're angry at me because I called them Caucasian, which I think is a racial slur somewhere. The RAMONES did 'Journey To The Center Of The Mind', and again, God bless 'em, I love 'em and I'm honored that they would choose my songs, but what Greg Arama [bass] and Dave Palmer [drums] did on 'Journey To The Center Of The Mind' as kids, teenagers — 15 years old they were; I think 16 years old — there's a Motown funk brother pulse to my songs and my rhythms. And those guys kind of flail away at it. And again, if you're a big fan of flailing away, God bless you — flail away."

Ted went on to clarify: "I'm not condemning it, but I'm critiquing it. And it's not quite the thump that my original songs [had]. And [my new album] 'Detroit Muscle' is wall-to-wall thump because Greg and Jason still channel The Funk Brothers [a group of Detroit-based session musicians who performed the backing to most Motown recordings from 1959 until the company moved to Los Angeles in 1972] and they still channel that black soulfulness. We were raised on James Brown tightness, and that's what Mitch Ryder delivered, that's what Bob Seger delivers, that's what Kid Rock delivers, that's what GRAND FUNK delivers, that's what the MC5 delivered. Those are my favorite musical things because they have a sexy grind to the rhythm. And I just don't think anybody could claim that the RAMONES were ever sexy. And God bless 'em; they just weren't sexy. [Laughs]"

Back in 2006, Nugent slammed PANTERA's cover of his signature tune "Cat Scratch Fever" as having "no soul, no balls" and "no feel," adding that the members of PANTERA appeared as "Ozzy-like zombies on TV" whose conduct on stage went against his lifelong anti-drugs and -drink stance.

Responding to a fan posting on Nugent's official message board (dubbed "The Nuge Board") about late PANTERA guitarist "Dimebag" Darrell Abbott and the VH1 "Behind the Music" special on PANTERA that premiered several days earlier, Ted (who posted on the message board under the name "Nuge") wrote that he "never thought too highly of anyone foolish enough to take on the nickname of a life-destroying dope product and promote such family-destroying conduct on stage." (Apparently referring to the fact that Darrell's "Dimebag" nickname is a slang term for a $10 bag of marijuana.)

When another fan pointed out that Dimebag "loved" Nugent's music and that he had stated in a magazine interview that he often played some of Ted's riffs before a show to loosen up the fingers — going so far as to cover "Cat Scratch Fever" for the 1999 "Detroit Rock City" soundtrack — Nugent responded, "though I'm no expert on all things PANTERA, I did hear their version of 'Cat Scratch Fever' and it was exceedingly white. No soul, no balls, no feel. Caucasian all the way. Elements of dope, booze and heroin disconnect quite apparent as usual. There is no excuse for such horrifically negative, irresponsible, criminal, America-wrecking behavior as such chimp-like substance abuse. Period. They appeared as Ozzy-like zombies on TV. Ya think. American drunks and dopers are allahpuke terrorists' favorite allies. Damn them. Damn them all."

After the fan who started the original thread (who called himself "the A_team") defended Dimebag by saying that "you have to at least respect Dime as a guitarist," adding that "even though he did drugs, I heard he didn't do very many," Nugent replied, "I indeed do respect all people for the positives in their life. Sadly, there comes a time of diminishing returns in the balance. At the end of the day, my respect is reserved for those solidly in the asset column of mankind."

"Detroit Muscle" was released in April via Pavement Music. The follow-up to 2018's "The Music Made Me Do It" was produced by Michael Lutz and Nugent.