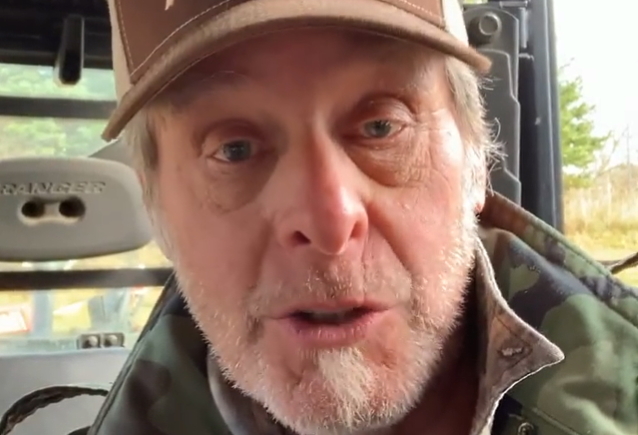 TED NUGENT Slams JOE BIDEN, Says People From All Over The World Are Saying, 'What The Hell Are You Guys Letting Happen To America?'

During an appearance Friday (April 30) on Newsmax, outspoken conservative rocker and pro-gun activist Ted Nugent discussed President Joe Biden's recent push for stricter gun laws as well as call for the Congress to pass a police reform bill. He said (as transcribed by BLABBERMOUTH.NET): "I've gotta tell you, I hang around with a lot of great families every day of my life here in Texas, and I'm in communication with great families all over the world. I think the most important indicator right now is not the self-evident truth that we the people of the United States Of America stand for and continue to believe in and celebrate, but around the world I'm hearing from people from every corner of the planet going, 'Uncle Ted, what the hell are you guys letting happen to America? We look to America as the last, only good place where you have individual freedoms as guaranteed by that sacred Constitution and Bill Of Rights. They're looking at America right now literally with this freak in the White House and his gang that violate their oath ever day, the rest of the world is sitting back and going, 'America, you'd better put the brakes on, because you're turning into Portland and San Francisco and homeless and feces and needles and exploding crime rates that is engineered.' So, that pulse of goodwill and decency is alive and well out here."

He added: "I've gotta tell you, anybody that's not a member of the National Rifle Association or Gun Owners of America or your state's Second Amendment organization, if you're not an actual active member in those organizations, [House Speaker] Nancy Pelosi and Joe Biden would like to thank you."