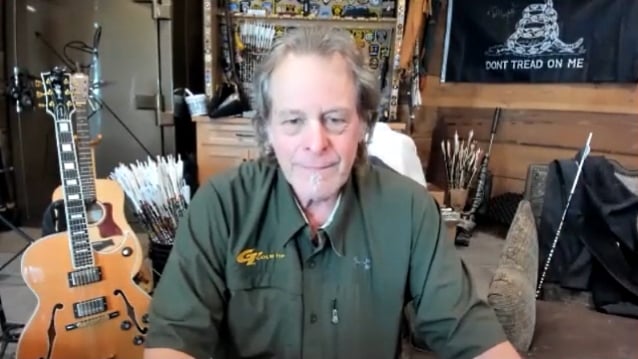 TED NUGENT: Vegans Are 'Responsible' For The Most Animal Deaths

Ted Nugent says that vegans are "responsible" for "the most death possible" because millions of animals are killed every year to prepare land for growing crops, like corn, soybean, wheat and barley, the staples of a vegan diet.

The outpoken conservative rocker and avid hunter, who is the national spokesman for pro-hunting lobbying group Hunter Nation, addressed the topic while being interviewed by the 96.1 KLPX radio station. He said (as transcribed by BLABBERMOUTH.NET): "If you wanna be responsible for the most death possible, become a vegan. Because behind that tractor and that plough and that disc, unless you hide and deny it, are crows and seagulls following that tractor growing your tofu because the plough and the disc dismember and mutilate everything in those gazillion acres — every squirrel, every ground-nesting gopher, every ground-nesting bird, every snake, every turtle, every animal in that field that's turned into tofu is slaughtered by the gazillion."

"My son's a vegan, my buddy Michael Lutz [of] BROWNSVILLE STATION, my co-producer, he's a vegan for health considerations, for digestive considerations," Nugent added. "That's perfectly legitimate. I'm not knocking veganism. But don't think for a minute that there's a reduction in animal deaths because you have a tofu salad. Just the opposite takes place. And denial is such a convenient lie. So all you vegans, just keep eating your vegan salad because I love when you dismember all those animals and the crows and the seagulls pick up on them as they're writhing in horror and being tortured so you can have a nice 'blood-free' salad."

Nearly two decades ago, animal science researcher Steven Davis claimed in a controversial article that the harm done to wild animals through raising vegetables was greater than the combined harm to wild and domestic animals through raising large herbivores on pasture. Writing in the Journal Of Agricultural And Environmental Ethics in 2003, he argued that the animals in this case are mice and moles and rabbits and other creatures that are run over by tractors, or lose their habitat to make way for farming, so they are not as visible as cattle. "Perhaps," Davis wrote, "we are obligated to consume a diet containing both plants and ruminant (particularly cattle) animal products."

Nugent, who recently resigned from the board of the National Rifle Association (NRA) after 26 years, is promoting his new album, "Detroit Muscle", which is due on April 29, 2022 via Pavement Music. The follow-up to 2018's "The Music Made Me Do It" was produced by Lutz and Nugent and was recorded with Ted's current band, which includes bassist Greg Smith and drummer Jason Hartless.